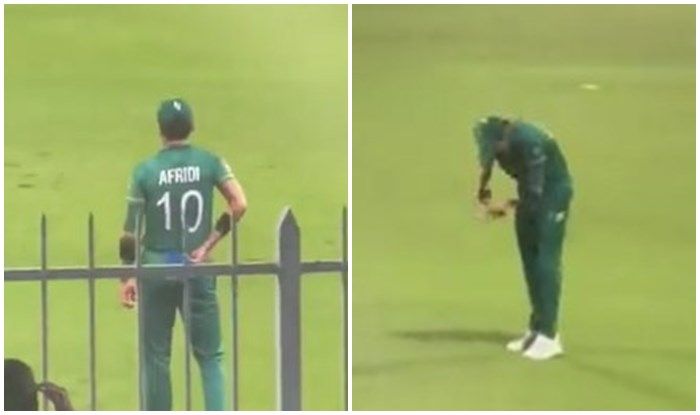 Sharjah: Young Shaheen Afridi has been in the form of his life in the ongoing T20 World Cup. It was the left-arm fast bowler that got things rolling for Pakistan with early wickets of Rohit Sharma and KL Rahul in their tournament opener in Dubai. While those two wickets inside the powerplay helped Pakistan restrict India to a low total and win the match, Shaheen seems to have not forgotten the dismissals of the India openers.Also Read – Ravi Shastri’s Last Dressing-Room Speech as India Coach to Virat Kohli & Co: ‘You Guys Have Exceeded Expectations’

During Pakistan’s game against Scotland on Sunday, fans started shouting Rohit’s name while Shaheen was stationed near the ropes. The Pakistani pacer recreated the dismissal and that impressed the fans, who also yelled the name of Rahul. Also Read – India’s Predicted Squad For New Zealand T20I Series: Rohit Sharma-Rahul Dravid Era Set to Begin; IPL Stars in Fray For Selection

Here is the video that is going viral: Also Read – No Rohit Sharma, KL Rahul; Dinesh Karthik Picks His T20 World Cup Team of The Tournament

Shaheen ran in with speed, gusto and bowled a near-perfect yorker on the fourth delivery of the first over of the innings to trap Rohit in front of the wicket. It was a golden duck for the veteran India opener as he failed to open his account and was dismissed on the very first delivery he faced.

To Rahul, he bowled a perfect in-swinger at a pace of more than 140 kmph to rattle the right-handed batter’s stumps.

Shaheen, who has picked up six wickets thus far, has been one of the major reasons for Pakistan’s success in the T20 WC. The Babar Azam-led side has is yet to be beaten. They have played five and won all. The Pakistan side would now take on Australia in the semi-final.

Given their good form, Pakistan start favourites in that knockout game.