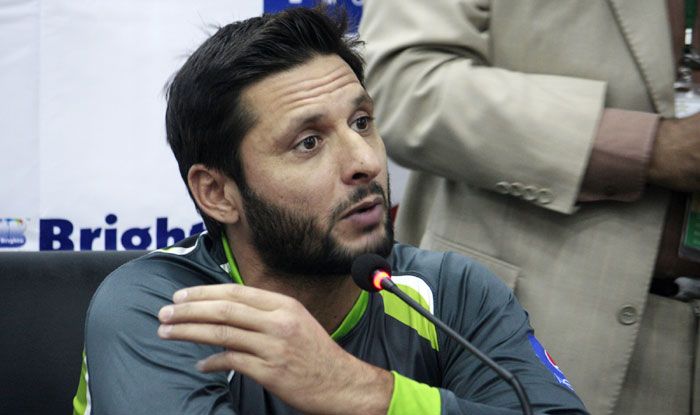 Karachi, Nov 12: Former Pakistan captain and T20 World Cup winner, Shahid Afridi is upset by the dismal performance of Shaheen Shah Afridi, as the young pacer conceded three back to back sixes off Matthew Wade who guided Australia to their first T20 World Cup Final in 11 years on Thursday at the Dubai International Cricket Stadium.Also Read – T20 World Cup: James Neesham Reveals His Winning Mantra Against England in Semi-Final

‘I am not happy with Shaheen in one area. Okay so Hasan Ali dropped a catch but that does not mean you will bowl badly and get hit for three successive sixes,’ Shahid Afridi said on Samaa TV channel. Also Read – T20 World Cup: Glenn Maxwell Exchanges Jersey With Haris Rauf After Pakistan vs Australia Match, Says He is Proud of Him

Shaheen has so much pace and he should have used it sensibly. Even if the catch was dropped. He should have used his head and tried to bowl outside off stump fast Yorkers with his pace. He is not that sort of bowler to be hit like that,” the former Pakistan captain.

Afridi said he believed that the semifinal would be a big learning experience for Shaheen and he should benefit from it.

Shahid however praised Shaheen for his bowling throughout the tournament, especially with the new ball.

‘I would say he was brilliant in the tournament and I have only seen either Wasim bhai (Akram) or perhaps Muhammad Amir bowl like this with the new ball,’ he added.

‘He is giving good performances. I hope he learns from this cricket experience and prepares himself for the future.’

Shaheen set the World Cup on fire when he got rid of top players like Rohit Sharma and KL Rahul with the new ball in Pakistan’s big match against India and even in the semifinal sent back Australian captain Finch in the first over.