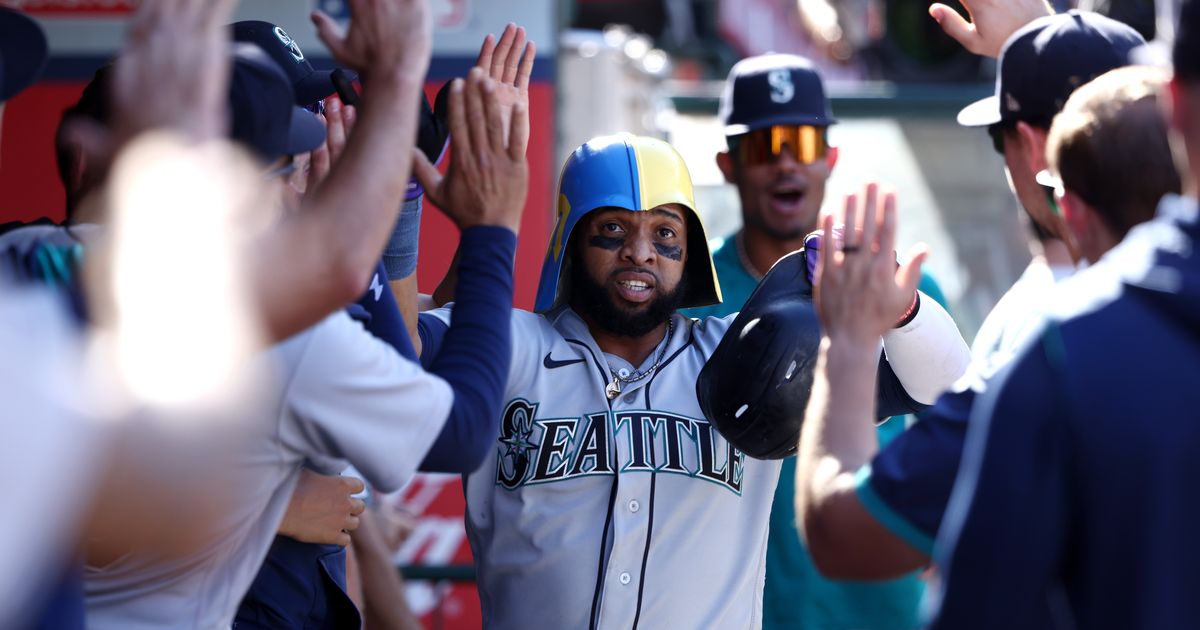 A GRIP ON SPORTS • We’re not sure we can ever remember a season of a baseball team we’ve followed that didn’t include a player like Carlos Santana. The acquisition of a veteran hitter or pitcher doesn’t always make a splash. But oftentimes it leads to a flood of success.

• Santana hasn’t been the answer to everything that ails the Mariners. But his presence since being acquired early in the season from Kansas City has made a difference. We can think of three games off the top of our head he was the dividing line between winning and losing.

And that doesn’t include yesterday.

The Mariners’ pitching – thanks Logan Gilbert – was so good in Anaheim they probably would have won anyway. After all, the final was 9-1. But Santana’s grand slam was key. And his other home run – yes, he hit two – took away all drama.

It was a needed victory. The Seattle offense has been missing in inaction lately. Way too many injuries to too many key players. Enter Santana. He has to play, what with Julio Rodriguez and Cal Raleigh sidelined. His potent bat – at times – changes to dynamic.

He did that early in his tenure in Seattle – pardon me, early in his second tenure – with two late-inning home runs that led to victories. He’s also delivered key hit s in other games. He’s not Pete Rose, mind you, but this season he’s been Mr. Clutch a few times – to mix sports metaphors.

Such folks, veteran players who switch teams midway through the season and supply a needed spark, have written a legacy throughout the years in major league baseball. Not often, but enough to be remembered. And if the M’s go on to make the postseason, Santana’s contributions will be remembered – even if he’s not part of the clubhouse next season.

• We’re not sure there is a worst job in the NFL than offensive coordinator for the Seattle Seahawks. And not just because Russell Wilson is in Denver. It’s the boss.

Pete Carroll hasn’t liked one of his OCs, it seems, since his days with USC. When whoever was calling plays had Reggie Bush, Matt Leinhart, Carson Palmer and such at their disposal.

Since then, the OC has been the SG. That stands for scapegoat. Every year. This year’s version, Shane Waldron, is the latest to wake up one morning and try to figure out where the bus that just ran him over came from.

“After two weeks of watching Geno play, we don’t need to hold him back at all,” Carroll said his weekly KIRO-AM radio show yesterday. “Geno has got his game ready to go. We need to trust him and maybe give him more opportunities and stuff.”

Guess who makes those decisions? Yep, Carroll. Waldron is in Seattle because the Seahawk offense was too conservative for Wilson. He wanted more and last year, when Waldron came in, he hoped to get it. Except Carroll would rather run the ball. Every play if he could. The transformation didn’t happen. Meanwhile, Waldron’s old team, the Rams, won the Super Bowl. And Wilson left town.

Did that change Carroll’s attitude? Nope.

“We’ve been pretty solidly conservative, counting on running the football,” Carroll pointed out Monday. “When we didn’t run the football, we didn’t have as much of a mix that we needed. We can do better with that.”

Uh, isn’t that what you say you want, Mr. Carroll? A running team?

“Whether that’s right or wrong, that’s not the point,” he continued. “The point is we need to keep expanding. We have too many explosive avenues to go to, and we’ve got to make sure these guys show up.”

In other words, the OC isn’t doing his job. Ya, but guess what? As soon as Waldron decides to open it up and it doesn’t work – see Carroll’s response to the trick play near the goal line – the knives will come out about that.

WSU: The Ducks come to Pullman on Saturday. Colton Clark has his first look at the matchup. … The key Washington State defender? That is probably linebacker Daiyan Henley, who is the Pac-12’s defensive player of the week. Colton has that story as well. … Elsewhere in the Pac-12 and college football, Jon Wilner takes his first look at the weekend’s betting lines. … Here are some rankings from around the nation. Wilner, who follows the conference, has WSU second in the Pac-12. National writers, who don’t, have the Cougars sixth. … Michael Penix Jr. came to Washington via the transfer portal. Now he’s transformed the UW offense. Up next for the Huskies: Stanford. … The Cougar game is Oregon’s first true road game of the season. The Ducks are hoping to get some injured players back. … Oregon State will enter its final Corvallis showdown with USC without its best tight end. The Trojans have more stars than their opponents. … Arizona State took its sweet time before firing Herm Edwards. Now it’s giving Shaun Aguano a shot. That change could cause Utah some issues. … It’s not like Colorado isn’t working hard to get better. Will it show when UCLA comes to Boulder this weekend? The Bruins need to play bigger names to draw bigger crowds to the Rose Bowl. … Arizona travels to California on Saturday. It plays Colorado next week.

Gonzaga: How would you like a look at the future of former GU players Corey Kispert and Rui Hachimura? OK. We’re here to help.

EWU: Former Eastern receiver Kendrick Bourne is ready to help New England whenever needed. … Elsewhere in the Big Sky, Idaho State shot itself in the foot against Central Arkansas. … Montana is ranked second nationally. … Montana State is focused before its game at Eastern this weekend.

Whitworth: The Pirates are about to induct another Hall of Fame class. Who is in it? Find out in the S-R’s latest local briefs column.

Preps: Dave Nichols has a roundup of Monday’s action around the area.

Seahawks: Is the Hawks offense too conservative? Certainly. But whenever something out of the ordinary is tried, there is Carroll to criticize it.

Mariners: Why was the 9-1 win so crucial? After starting the road trip 0-3, the M’s needed to stop the slide. They don’t seem to be in much danger of missing the playoffs – Baltimore is in a funk as well – but finishing third in the wild-card race is also not good. The first wild-card spot includes the reward of three first-round home games. Second? You get to play the Central champion, then, if you win, avoid the Astros in the next round. Sure, the Yankees. But that’s better than Houston. The third spot? A road series followed by, if you’re lucky, a matchup with the Astros. Not optimum. … Ty France seems to have figured out his issues. … The new rules will change baseball. Make the game quicker. But it may not change things as much as most think.

Kraken: The length of the NHL season demands a player be in great shape.

• For the past 24 hours it’s been raining where we are. Hard at times. In this part of the world – the California central coast – the way it’s been received reminds me of the poster from the Shawshank Redemption. Until later …