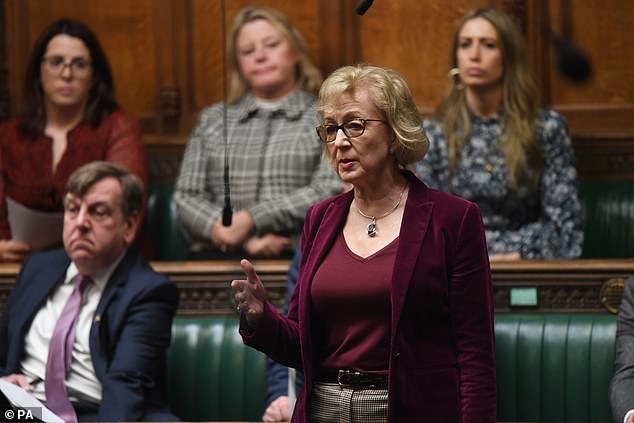 MPs should not bring babies to House of Commons debates, a former Cabinet minister has said.

Senior Tory MP Andrea Leadsom said she disagreed with the idea of MPs bringing their children into the debating chamber, arguing there is a ‘time and a place’.

Mrs Leadsom said that when she previously worked in a bank she ‘would not have been taking my babies into the office’.

However, she said she believed that MPs carrying their children when they go to the Commons to vote is ‘absolutely fine’.

Her comments came after a furious row was sparked last year when Labour MP Stella Creasy was told she was not allowed to take her baby son to debates.

Senior Tory MP Andrea Leadsom said she disagreed with the idea of MPs bringing their children into the debating chamber, arguing there is a ‘time and a place’

Mrs Leadsom, a former business secretary, was asked during an interview with ex-Labour MP Gloria De Piero on GB News how she felt about MPs bringing babies into the Commons.

The married mother-of-three replied: ‘I’m not so keen, you know I mean, I think going through the lobby (to vote) is absolutely fine.

‘But actually you know I kind of remember working in a bank I would not have been taking my babies into the office and you know there’s a time and a place.

‘I don’t think just because you want to support families, to be more hands on, that you should therefore just say “oh yeah, let’s just start taking babies everywhere we go and let everybody else put up with it”.

‘I don’t agree with that. On the other hand, I am a huge fan of breastfeeding, it’s incredibly good for babies’ health, for a mum’s health, for the bonding process for, reducing obesity and later childhood illnesses and so on and so I actually do think that in our society more generally we need to be much more tolerant to women breastfeeding in public places.’

A row erupted last November after Ms Creasy was told she could not sit in the Commons with her three-month-old son.

The Labour MP was told it was against the rules to bring a child to a debate in Westminster Hall.

She tweeted at the time: ‘Mothers in the mother of all parliaments are not to be seen or heard it seems…’

She faced criticism from Red Wall Tory MP Scott Benton, who questioned why she needed to bring her son to work.

‘Parents who get paid a fraction of what you do pay for childcare and juggle responsibilities so they can go to work,’ the Blackpool South MP said.

‘What makes you so special?’

Ms Creasy later hit back and said: ‘We don’t have employment rights so don’t have maternity cover to be able to do juggling, hence needing to take baby with me.

‘But great to hear your support for ensuring mothers can be part of politics. Guess being anti choice for women is just in your DNA.’

Then in December Sir Lindsay gave his blessing to MPs who are new parents to bring their babies into the chamber during debates.

He said it should be up to the discretion of the person in the speaker’s chair at the time – either he or one of his deputies – to make a call based on whether the infant is disrupting proceedings.

Parliament’s rule book states that MPs ‘should not take your seat in the Chamber when accompanied by your child, nor stand at either end of the Chamber, between divisions’.