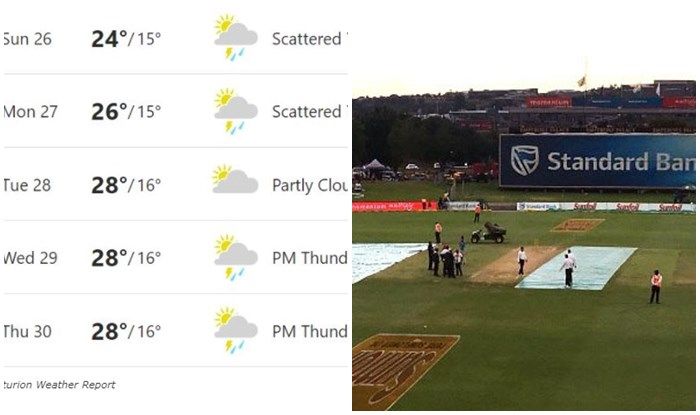 Centurion: In less than a week, Virat Kohli-led India would take on hosts South Africa in the first Test at Centurion with the hope of starting the tour with a win. A win would not be easy against the formidable hosts and that would make things interesting as a close fight is on the cards. Eyes would be on the skies because there are predictions of rain playing spoilsport during the first two days of the Test. That is the last thing fans would want.Also Read – India’s Predicted Playing XI For 1st Test vs South Africa: In Rohit Sharma’s Absence; Mayank Agarwal Likely to Open With KL Rahul For Boxing Day Test at Centurion

As per The Weather Channel and AccuWeather, thick cloud cover with thunderstorms is predicted for the first two days with the chances of rain more than 60%. That is not good news for fans who would love to see their heroes in action. Also Read – Ashes 2021: Expect Grass and Seam Movement For Fast Bowlers At MCG For Boxing Day Test

Not just the rain, but reports suggest that the SuperSport Park pitch is going to assist the pacers more than the spinners because of the greenish nature of it. On Monday, the BCCI shared a short clip where batter Shreyas Iyer was heard speaking about the pitch. Also Read – The Rise and Rise of Marnus Labuschagne in Test Cricket: From Substitute Fielder to World No 1

“There’s grass on the wicket,” said Iyer in the video. It will be challenging for the batters to bat on and it looks like the wicket will be a bowlers delight. If that is the case, both sides have quality pacers to exploit the conditions.

Meanwhile, in seven attempts in the past – India has never won a Test series on South African soil. That is something Kohli and his boys would like to change. Also, India has never defeated the hosts at Centurion.