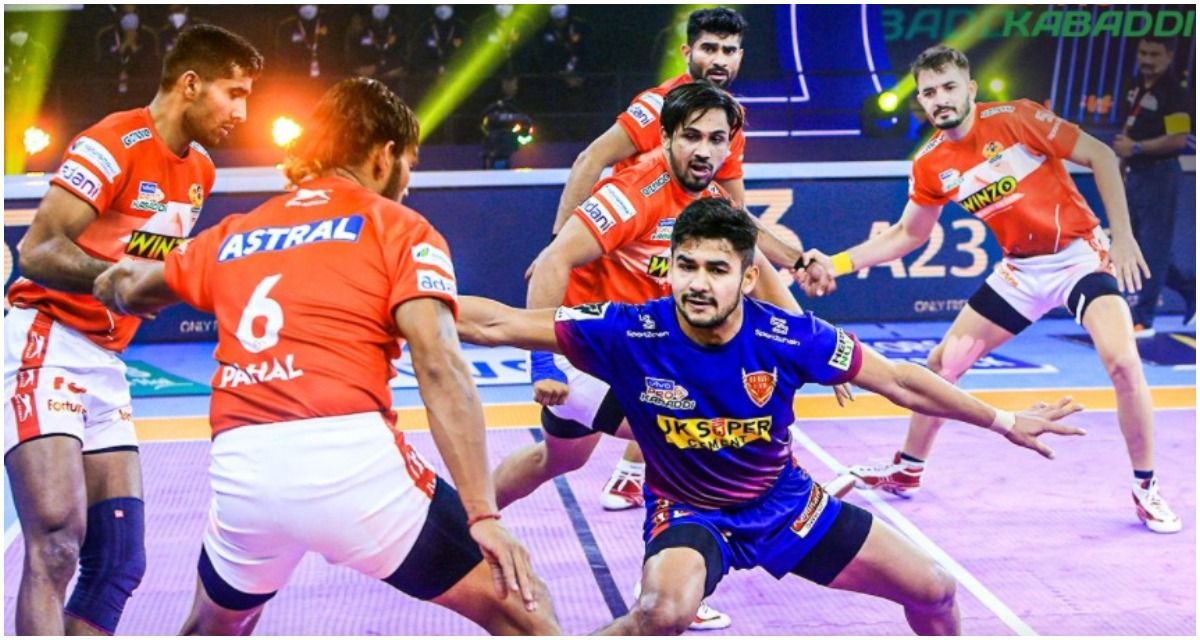 Delhi’s star raider once again secured a Super 10 (11 points), his third in three matches of Season 8 – but the team was lucky to escape with a tie after another match filled with mistakes from its defence. Also Read – GUJ vs DEL Dream11 Team Prediction Vivo Pro Kabaddi League: Captain, Vice-Captain, Playing Teams of Match 13 Between Gujarat Giants vs Dabang Delhi KC at Sheraton Grand, Whitefield, Bengaluru at 7:30 PM IST December 26 Sunday

Gujarat will only have themselves to blame after Rakesh Sanrogya and Rakesh Narwal had opened up a chance for them to win the encounter against Season 7 runners-up. Also Read – BEN vs GUJ Dream11 Team Prediction Vivo Pro Kabaddi Match 9: Fantasy Hints, Playing 7s, Captaincy Picks- Bengal Warriors vs Gujarat Giants, Team News For Today’s Kabaddi Match at Sheraton Grand Whitefield at 9:30 PM IST December 24 Friday

Despite the focus on Gujarat’s defence, it was the raiders who secured most points for the Giants in a closely fought first half.

Rakesh Narwal and Rakesh Sanrogya picked easy points of the Delhi defence who once again gave starts to seniors Ajay Thakur and Manjeet Chhillar despite very little contributions from them in the previous matches.

Delhi’s Naveen Kumar ensured the Gujarat Giants didn’t open up any lead, picking three points from his first three raids while sending the covers Girish Ernak and Ravinder Pahal to the dugout.

The first 15 minutes only saw 1 successful tackle, each from both sides. There were no ALL OUTS in the first half as it ended 12-11 in favour of Dabang Delhi K.C.

The teams continued to trade blows in the early minutes of the second half.

Gujarat had no answers to Naveen Kumar’s raids but Delhi’s defence kept imploding thanks to unsuccessful tackles from Manjeet Chhillar and Jeeva Kumar. Naveen clinched his Super 10, three in three matches of Season 8, in the 5th minute of the half.

The Gujarat defence finally managed to get Naveen Kumar out with less than 10 minutes in the clock. Brilliant raiding by Rakesh Sanrogya and Rakesh Narwal kept the Giants in pace with Delhi.

But Vijay quickly managed to revive Naveen Kumar with a touch point and followed it up with an effective charge on Rakesh to give Delhi a slender lead in the 14th minute of the second half.

Rakesh’s effective kick had given Gujarat a one-point lead going into the last raid but a blunder from Ravinder Pahal, who went in for an early thigh hold on Naveen Kumar, handed Delhi a tie.

In the second match of the night, Pawan Sehrawat and the Bengaluru Bulls produced an all-round performance to beat defending champions Bengal Warriors 36-35.

Pawan scored 15 points for the Bulls who won the match due to a last-minute two-point raid by South Korean Dong-Geon Lee. Bengal will only have themselves to blame after being given a good start by captain Maninder Singh who scored 17 points.