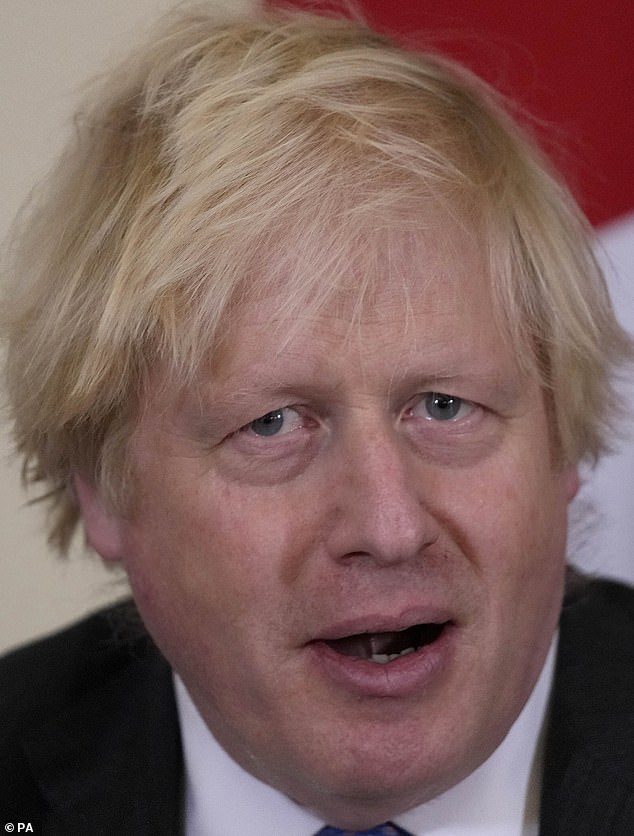 Credit where it’s due to Labour for proving it’s never too late to change your mind.

Not only has the party warmed to Brexit (grudgingly), it’s proposing tax cuts, too!

Sir Keir Starmer treated the public with disdain by trying to overturn the referendum, insisting no good could come of it.

Well, his flagship plan to help families hit by spiralling energy prices – axing VAT on fuel bills – would be impossible inside his beloved EU. But Boris Johnson, who championed lopping the levy once outside the bloc, has cooled on the idea – letting Labour steal his political raiment.

As the cost-of-living crisis erupts, the Prime Minister must stop dithering over his own rescue package.

As the cost-of-living crisis erupts, the Prime Minister must stop dithering over his own rescue package

While No10 sleaze scandals may recede in voters’ minds, they are less likely to forget (or forgive) a government that forces them to choose between heating and eating.

Mr Johnson should, then, heed the wise words of Lord Frost. The ex-Brexit minister urges him to ignore poor advice and follow his Tory instincts for free markets, low taxes and sensible environmentalism. That would allow post-Brexit Britain to maximise its new freedoms – and thrive.

It’s a lesson Boris should remember.

Mr Johnson ought also to revisit lessons from the pandemic.

At his boldest, he has been at his best. He threw the kitchen sink at the world-beating vaccine programme.

While the Cassandras wailed, he unlocked the country in July. When in full cry again before Christmas over Omicron, he weighed up the risks and rejected tougher curbs.

Each time he was vindicated. Most of Europe is still closed to varying degrees. Britain stayed open and has suffered no upswing in hospitalisations and deaths.

So the Mail believes Britain can and should lead the world again. This time by learning to live with Covid (stock image)

So the Mail believes Britain can and should lead the world again. This time by learning to live with Covid.

Unless a deadly new variant emerges, we must treat outbreaks like colds or flu, and not inflict economic and societal hardship through repressive measures.

In the meantime, Mr Johnson should cut the outdated self-isolation period from seven to five days – easing staff shortages in schools, hospitals and businesses.

The country is crying out for a return to normality. Reducing quarantine would be another stride along the path.

Another reason Mr Johnson won power was his promise to end the scandal of dangerous foreign criminals being able to escape deportation.

The public had grown weary of overseas convicts, aided by an army of human rights lawyers and perverse rulings from permissive judges, living here with impunity.

Yet has anything changed? In a verdict that would be farcical if not so serious, a court let an Afghan rapist stay because the Taliban takes a dim view of sex attackers.

And it gets worse. An Iranian sex predator dodged ejection after claiming his cross tattoo proved his conversion to Christianity, meaning he could be killed back home.

Meanwhile, our report finds Albanian offenders are brazenly living here, having been booted out. So much for ministers taking back control of our borders!

Until the Government tackles such affronts to justice, law-abiding citizens cannot sleep easily in their beds.