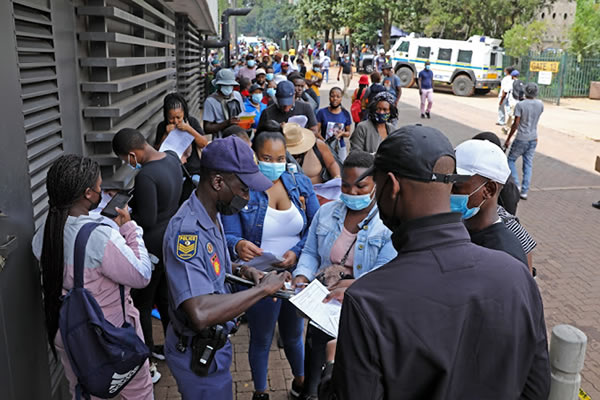 Both men made news headlines with their stances regarding undocumented foreign nationals.

Operation Dudula held a community meeting at Dobsonville, Soweto, at the weekend to provide an update on the progress made in its operations against undocumented immigrants who came to look for employment in South Africa.

Dlamini told eNCA that while the organisation had made strides in ridding communities of illegal immigrants who were allegedly committing crimes, these efforts were thwarted by corrupt police officials who accepted bribes instead of instituting arrests.

“When we had operation o kae molao, people were taken to Lindela [Repatriation Centre]. When they get to Lindela people disappear because they are drowning in corruption.

“We were discussing how we can help police and government so we make sure loose ends are tightened. Sometimes it is not government but that odd police officer who can’t think beyond his hand,” said Dlamini.

Some Twitter users commended Dlamini, who they said unlike Malema is dedicated to defending South Africans who lost jobs or business opportunities to undocumented foreign nationals.

Others came to Malema’s defence, saying as the leader of one of SA’s biggest political parties, he should not be compared with a leader of a community-based organisation.

Malema has not shied away from speaking publicly about the EFF’s stance on foreign nationals and its support for open borders.

“They are targeting the easy targets in their own brothers and sisters. Why doesn’t Operation Dudula target land? Why not go to farms and attend to farmers targeting the lives of farmworkers?

“Be like us in the EFF and confront the white man directly and do not be scared. Protect your African brothers and sisters. Black people are one,” said Malema.

Here is what many on social media had to say about Malema and Dlamini’s responses to undocumented foreign nationals:

Comparing a whole elected public official who leads the country’s third largest political organization in parliament & meets with international leaders….to a leader of a vigilante stokvel. 😭😭😭🤣🤣🤣

Haters of Nhlanhla Lux are ANC RET members who wanted malls burned to create more joblessness. They have been having chest pains calling him colonial clerk for simply stopping criminality & saving jobs.