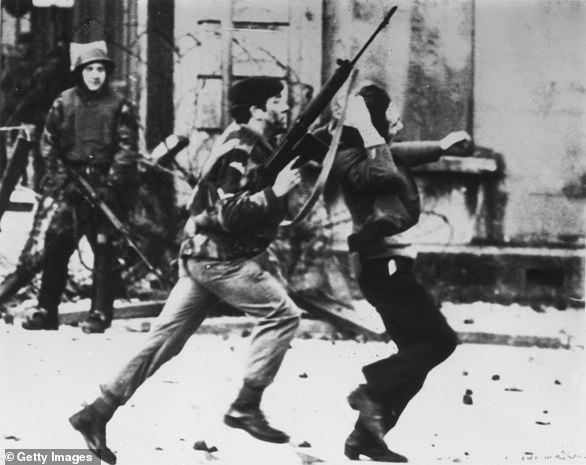 Thirteen unarmed civilians were shot dead by the 1st Battalion of the British Army’s Parachute Regiment on what became known as Bloody Sunday in Bogside, Londonderry on January 30, 1972.

Another 15 people were wounded in the shootings, with one of those injured – John Johnston – dying four months later.

Other protesters were injured by shrapnel or batons, and two were run down by army vehicles during the chaos which broke out on William Street.

The killings, which took place in the space of ten minutes shortly after 4pm, happened during a protest against internment without trial organised by the Northern Ireland Civil Rights Association (NICRA).

The parade, which involved an estimated 15,000 to 20,000 people, had set off from Bishop’s Field in the Creggan area of Londonderry, with plans to end at the Guildhall.

But when the march reached the city centre, those in charge decided to avoid Guildhall and instead walk to Free Derry Corner in Bogside as the route had been blocked by British Army barriers.

However, several demonstrators diverted from the main group at Rossville Street and continued to where a barricade had been erected on William Street to prevent approaches to Guildhall.

Those involved began throwing stones towards the soldiers at around 3.40pm, and the Regiment responded by firing plastic bullets, CS gas and spraying demonstrators with water cannons.

In the Saville Inquiry, which investigated the circumstances of Bloody Sunday, Lord Saville said soldiers from the Royal Green Jackets ‘acted with restraint in the face of the rioting at this barrier and deployed no more than properly proportionate force in seeking to deal with it’.

At around 3.55pm it is understood the crowd spotted paratroopers occupying a derelict three-story building overlooking William Street, and began throwing stones at the windows.

These soldiers then opened fire, with Damien Donaghy and John Johnston shot and wounded while standing on waste ground opposite the building.

Colonel Derek Wilford, commanding the Regiment, sent a message to Brigade Headquarters from his position near a church suggesting troops be sent through the barrier to arrest rioters.

A mural depicting those who lost their lives on Bloody Sunday in Rossville Street, Londonderry

A few minutes later, at 4.07pm, Brigadier Pat MacLellan gave orders for the Regiment to mount an arrest operation at William Street – known as Barrier 14 – but not to ‘chase people down the street.’

Colonel Wilford deployed one company through Barrier 14 as permitted, but also deployed a support company in vehicles from the nearby Barrier 12 on Little James Street.

Those from Barrier 12 travelled into Bogside and disembarked, which is when more rifle shots were fired.

Soldiers opened fire in the car park of the Rossville Flats, shooting teenager Jackie Duddy, 17, in the back as he ran with Father Edward Daly and wounding several others.

Six others were shot on Rossville Street, as other soldiers entered Glenfada Park North, where William McKinney, 26, and Jim Wray, 22, were fatally wounded.

Those in Glenfada Park North then went to its south-east entrance, from where they fired across to Rossville Street and killed Bernard McGuigan, 41, and fatally injured Patrick Doherty, 31.

Nearby, in Abbey Park, a British Army solider shot Gerard McKinney, 35. The shot passed through his body and hit Gerald Donaghey, 17.

In total, 26 unarmed civilians were shot by paratroopers during Bloody Sunday. Thirteen died on the day and another died of his injuries four months later.

At an inquest into the deaths, held in August 1973, coroner Hubert O’Neill, a retired British Army major, said: ‘This Sunday became known as Bloody Sunday and bloody it was. It was quite unnecessary.

‘It strikes me that the Army ran amok that day and shot without thinking what they were doing. They were shooting innocent people.

‘These people may have been taking part in a march that was banned but that does not justify the troops coming in and firing live rounds indiscriminately.

‘I would say without hesitation that it was sheer, unadulterated murder. It was murder.’