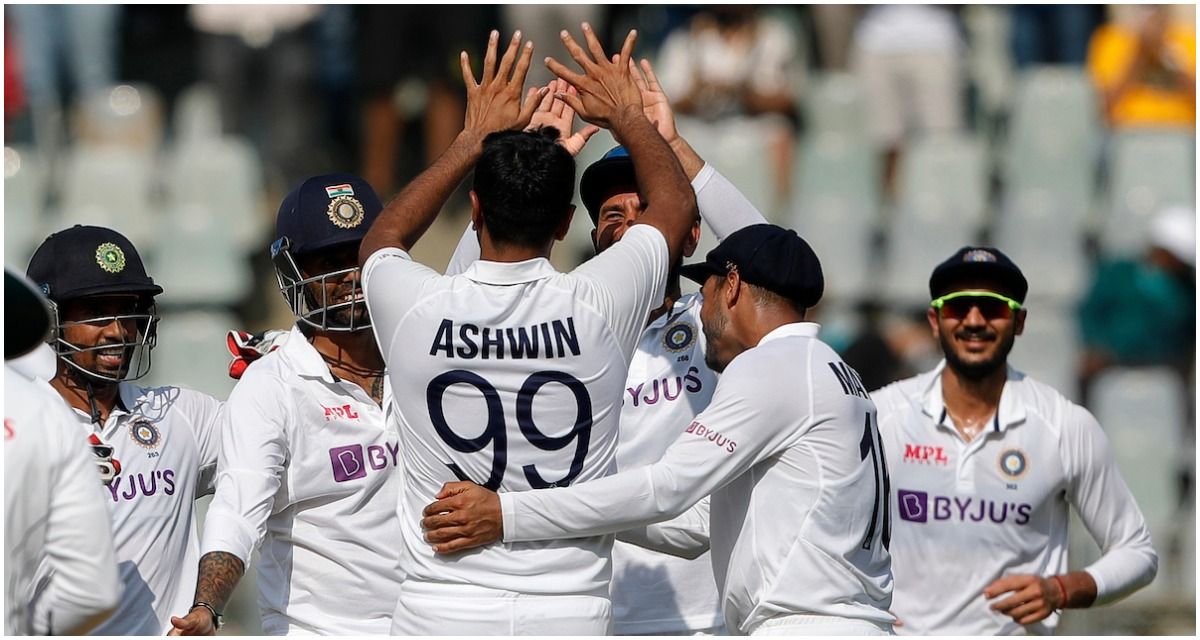 Mumbai, Dec 4:  India take a massive stride towards victory in the 2nd and final test of the series, as Virat Kohli and co. bundled out the Kiwis for a paltry 62, swelling the lead to 332 at Stumps on Day 2 at the Wankhede Stadium. It was New Zealand’s Ajaz Patel’s day as the Indian-origin bowler took 10-wickets in an innings, joining the likes of Anil Kumble and Jim Laker in the list.Also Read – IND vs NZ MATCH HIGHLIGHTS Today 2nd Test, Day 2 Updates: India Lead New Zealand by 332 Runs at STUMPS; Ajaz Patel Makes History With Perfect 10 at Wankhede

Cheteshwar Pujara, coming out to open in place of an injured Shubman Gill, looked good during his 29 not out while Mayank Agarwal, after his fine 150 in India’s first innings total of 325, remained unbeaten on 38. Also Read – India vs New Zealand: Stars Aligned For Me to Do it In Mumbai, Says Ajaz Patel

The second day of the second Test should have solely belonged to the 34-year-old Patel, who had figures of 42.5-12-119-10, to join the ‘Elite List’, where he has late Jim Laker and Indian great Anil Kumble for company.

By keeping India’s first innings total down to a manageable level, Patel must have had a sense of elation but before the plethora of congratulatory messages on social media would stop coming, his batters just flattered to deceive as they managed to bat out only 28.1 overs.

The team ended up scoring the lowest total by an overseas side on Indian soil.

The Black Caps batted 14.4 overs less than what their premier spinner took to get all the Indian players out.

They didn’t even let the feat sink in before Mohammed Siraj’s (3/19) hostile four over spell literally decimated them. There were two deliveries that straightened and had enough pace to beat the batter’s defence while the other was a mean bouncer.

Ravichandran Ashwin (4/8 in 8 overs) and Axar Patel (2/14 in 9.1 overs) were expectedly just too good on this track. The opposition batters simply couldn’t counter the turn and bounce.

The New Zealand innings finished even before the Indian bowlers were nicely warmed up and it was understandable that Kohli wanted some batting time against a battered opposition which would give him and Puara requisite confidence.

With the match all but in their pocket, Pujara stroked freely and also got a pulled six off Patel — a rarity from an exponent of defensive batting.

While Pujara will certainly value these welcome runs but it can’t be seen in isolation that it came when the pressure was already completely released due to a mammoth 263-run first innings lead.

Patel started the day with two quick wickets before Agarwal and Axar added 67 runs for the seventh wicket to take the score towards the 300-run mark. Axar got his first 50 and batted with a lot of caution and occasional aggression.

The best delivery of the six wickets that he got on the day, was the one that got Ravichandran Ashwin out as he drew the batter forward and turned enough to clip the bails.

Ashwin hilariously appealed for DRS without realising that he has been bowled as he thought that the bowler had appealed for caught behind.

The review was wasted as he had already asked for it and once he realised that he was beaten lock, stock and barrel, he didn’t wait for the final verdict.

No wonder when Patel got Siraj as his 10th and final victim, Ashwin was seen giving him a standing ovation from the Indian dressing room.

But little would Patel have known that it would turn into an anti-climax after Siraj’s opening burst which was as good as one saw in home Test matches where pitches aren’t conducive for pace bowling. However, this one had extra bounce.

The delivery that got Ross Taylor out was perhaps the best of the match.

The ball came in as Taylor shaped to play a defensive shot only to find enough deviation which beat the outside edge of his bat and knock back the off-stump.

That was one of a kind dismissal after which there was no chance of a recovery for the New Zealanders, who will now only look to delay the inevitable.