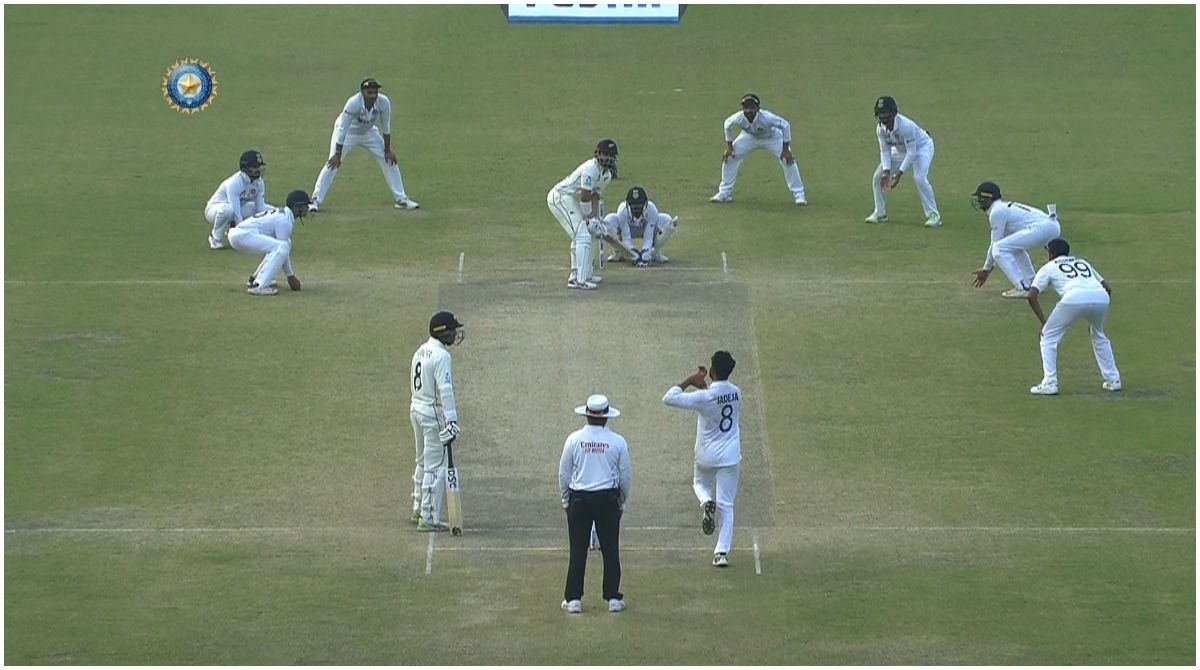 Kanpur: Rachin Ravindra and Ajaz Patel put up 52 balls of stubborn resistance to help New Zealand force a thrilling draw against India in the first Test of the two-match series at the Green Park Stadium here on Monday. From 155/9, Patel did a fine job of hanging in at the crease but it was the debutant Ravindra, who faced 91 balls and gave a great account of his temperament and composure to deny India a win.Also Read – India vs New Zealand: ‘Time’s up for Ishant Sharma’; Netizens Slam Indian Pacer

After going wicketless in the opening session of day five, Ravichandran Ashwin, Ravindra Jadeja, Umesh Yadav, and Axar Patel picked eight wickets in the next two sessions. But a stonewalling effort from Ravindra and Patel defied the Indian bowling attack, which was in a race against time as lights began to fade in the final half-hour of the day. Also Read – IND vs NZ, 1st Test: Time Wasted By Umpires Might Have Robbed India a Test Win vs New Zealand, ICC Need to Rethink On Rules of the Game

Axar Patel struck on the seventh ball of the final session, trapping Henry Nicholls lbw with the one turning in a little and went past the outer edge to hit the back pad. Ravindra Jadeja got some help from the pitch, getting one to grip and turn past Kane Willia’son’s bat, pretty similar to the jaffa from Umesh Yadav which squared up Williamson in the second session. In his next over, Jadeja trapped Williamson plumb lbw on the backfoot with a ball that came in and kept low. Also Read – LIVE India vs New Zealand Cricket Score 1st Test, Day 5: New Zealand Pulls Off A Heist; Draws The Game With One Wicket To Spare

Tom Blundell and Rachin Ravindra batted 54 balls together to try and save the match. Captain Ajinkya Rahane brought Ravichandran Ashwin in and immediately created a chance. But Blundell was saved by a sharp turn on an lbw appeal. India took the review but lost it as the ball was going down the leg-side.

In his next over, Ashwin claimed ‘lundell’s wicket in a very unusual fashion. Blundell came out to defend a turning delivery. But the ball hit the rough and rolled over to disturb the bails. Kyle Jamieson had some luck on his side as Cheteshwar Pujara was late to react to his left an’ couldn’t take the catch off Ashwin. But Jadeja ensured that the let-off on the second new ‘all won’t be costly as Jamieson was trapped lbw by one spinning past the outer edge to hit the back pad.

Jadeja scalped his fourth wicket of the innings by beating the outer edge of Tim Southee’s bat and trapping him lbw in front of off-stump. Southee took the review ‘ut couldn’t change the decision. Ravindra and Patel were sturdy in defence as India were in a race against time to wrap the innings.

Ashwin ‘truck Patel’s pad but was given not out as the ball pitched outside leg. India took the review but were unable to change the decision, thereby losing all reviews. Ravindra and Patel survived 52 balls for just 10 runs as New Zealand managed to eke out an escape by the barest of margins.

Earlier, India picked up three crucial wickets, including one each on the first and last ball of the second session, to make a comeback in the match. After not getting a wicket in the first session, India got one on the very first ball post-lunch as William Somerville tried to pull a short ball from Umesh Yadav, but it flew to Shubman Gill running in from fine-leg and completing a superb forward diving catch.

Yadav continued to trouble Latham and Kane Williamson, getting a lot of deliveries to keep low and targeted towards the stumps. But the duo continued to put up a defiant show while hitting the occasional boundary. Latham brought up his second half-century of the match with three runs through mid-wicket.

But four overs later, Latham, in a bid to punch through the off-side, chopped on to his stumps off Ashwin. The dismissal also meant that Ashwin went past Harbhajan Singh’s 417 wickets to become the third-highest wicket-taker for India (13th overall) in Test cricket.

Ross Taylor was nearly stumped on zero off Ashwin as there was no conclusive evidence to rule him out. His anxious stay at the crease ended on the stroke of tea as Jadeja trapped him plumb in front of the wicket.

Resuming from 4/1, Latham and William Somerville put up a show of stubborn resistance to keep India at bay in a wicketless first session. The duo showed great application in scoring 75 runs in 31 overs. They were rigid in defence, though Ashwin troubled them often while plucking boundaries against the pace of Yadav.

Latham was the first to take a boundary off Yadav, glancing through fine leg while Somerville struck a straight drive. Somerville then crunched delightful back-foot drives on consecutive deliveries off Yadav through off-side and was lucky in getting a boundary off the outer edge off Ishant Sharma.

India seemed to be a bit frustrated over not getting their first wicket of the day. Such was the desperation to get a wicket that they took a review for a Latham lbw despite the impact outside the off-stump, thereby wasting a review as New Zealand survived the rest of the session unscathed and eventually, the day.