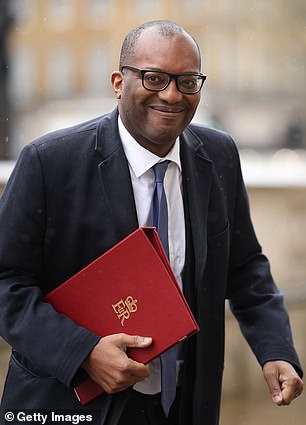 Kwasi Kwarteng today warned Britons that energy prices are set to spike again and there is little the government can do about it.

The Business Secretary delivered a grim message, pointing out that although the UK is not reliant on Russia for supplies wholesale gas prices have quadrupled.

But he dismissed calls from some Tories for shale gas to be extracted in Britain, saying that and North Sea production could not stabilise global market costs.

The intervention, in a thread of tweets, came as BP sent out emails to customers highlighting the eye-watering increases they face next month.

With the Ukraine crisis escalating, Russia has been left reeling by the latest sanctions hammer blow from the West.

Moscow’s central bank was forced to raise interest rates to 20 per cent after it was blocked from using reserves to shore up the plunging rouble. The currency is still barely worth a single US cent even after the emergency action.

However, sanctions are also set to take a toll on Western economies. BP shares have tumbled after it ditched a major stake in Russian oil Rosneft, potentially incurring a $25billion loss.

Business Secretary Kwasi Kwarteng (left) delivered a grim message, pointing out that although the UK is not reliant on Vladimir Putin (right) for supplies wholesale gas prices have quadrupled

Mr Kwarteng stressed the UK has ‘no gas supply issues’, with the North Sea (pictured) the main source and most imports coming from ‘reliable’ Norway

Mr Kwarteng stressed the UK has ‘no gas supply issues’, with the North Sea the main source and most imports coming from ‘reliable’ Norway.

‘Unlike Europe, we’re not reliant on Russian gas. But like others, we are vulnerable to high prices set by markets,’ he said.

But Mr Kwarteng said while there was plenty of gas it was going to be ‘expensive’.

He insisted the government will keep backing North Sea production, saying it is ‘good for jobs, energy security, tax revenue to fund public services, and kick-starting a hydrogen economy’.

Mr Kwarteng said although it would be ‘madness to turn off our domestic source of gas’ in the longer term the UK must ‘move away from gas’.

He said nuclear would play a key role, along with more renewables. ‘The more cheap, clean power we generate at home, the less exposed we’ll be to global gas markets,’ he said.

Lastly, the best way to keep energy bills down is through energy efficiency upgrades so we use less gas. In 2010, just 13% of homes were rated EPC C+, now it’s 48% – but more to do. That’s why we are investing over £6.6billion in efficiency upgrades over this Parliament.

BP saw a huge chunk wiped off its value following the announcement about abandoning the 19.75 per cent holding in the wake of the invasion of Ukraine

BP shares dropped by as much as 7 per cent at the start of trading before clawing back some of the ground.

The fall will affect millions of people as pension funds often invest in the company – although it said dividends will not immediately be hit.

The stake in the Russian state oil producer was theoretically worth $14billion, but it is unclear whether the company will be able to sell – with speculation the holding might be seized by the Kremlin.

Other investments in the deal could take the total loss to around $25billion.

BP chief executive Bernard Looney is also resigning from the Rosneft board with ‘immediate effect’, after ministers warned that the tie-up could not continue.

The FTSE 250 dropped by 0.68 per cent, while the other major European markets showed larger falls.

The German Dax slid by 1.9 per cent and the French Cac 40 tumbled 2.04 per cent at the start of trading as the situation in Ukraine continued to intensify.