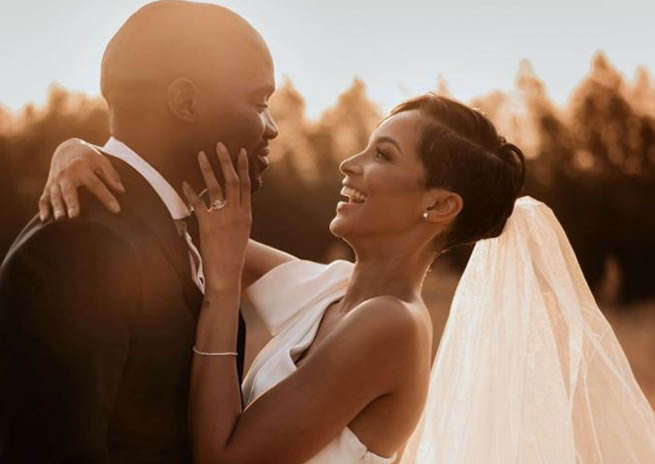 When their romance first started, Liesl Laurie-Mthombeni and her husband, Dr Musa Mthombeni, vowed that they’d never resort to violence if their relationship ever hit a rough patch.

“We’ve always vowed to respect each other and live as partners – not as one owning the other,” the former Miss South Africa says.

“We’ve been very clear on how we want to live our lives and if one day we should fumble, we will rectify it without hurting each other.”

The couple, who tied the knot in August, are committed to making their marriage a space that is free from abuse “in any shape, way or form” and they are now using their platform as public figures to inspire others to do the same.

The campaign is aimed at fostering a culture of smart drinking among consumers and reducing the harmful use of alcohol.

This year the focus is on intimate partner violence (IPV) – domestic violence by a current or former spouse or partner in an intimate relationship. With this in mind, the beer manufacturer has partnered with renowned fashion designer Suzaan Heyns to create a bridal gown designed using data from cases of IPV. The dress has some of the stories of IPV survivors printed on it.

“There are so many people who don’t even know what the abbreviation IPV stands for or what it means,” Liesl said.

“A lot of people think violence is only when someone harms you physically. But IPV is emotional and psychological abuse as well. This campaign unpacks issues that people aren’t aware of.”

The former Miss SA says when she and Musa, a medical doctor, were approached for the campaign, they felt compelled to tie themselves to an initiative “that carries weight and value”.

“We want to be in a space where we can ignite change – in somebody’s life, mind or moral compass.”

At an event to launch the campaign, Liesl (30) met survivors – or victors, as she calls them – of IPV and she says the experience made her emotional.

“Personally meeting someone who has been beaten to the point that they lost their teeth, or where their ribs were cracked and they punctured a lung. . . I have goosebumps remembering it.”

She and Musa (31) are now championing to have the vow they made to each other included in the list of standard marriage vows.

“We want the Department of Home Affairs to rewrite the vows, where ‘I will not abuse’ is a commitment people make.”

A petition to have this amended has already garnered more than 5 000 signatures.

Liesl says that by publicly proclaiming this vow, men will be held accountable and it will ensure there are no excuses for violence of any kind.

“Globally, one in three women experience IPV,” she says. “That’s a fact that people should know, comprehend and spread.”

Each of us carries the responsibility to eradicate gender-based violence and IPV, Liesl adds.

“If you witness someone being abused but simply sit back and watch this happen, you’re a huge part of the problem.”