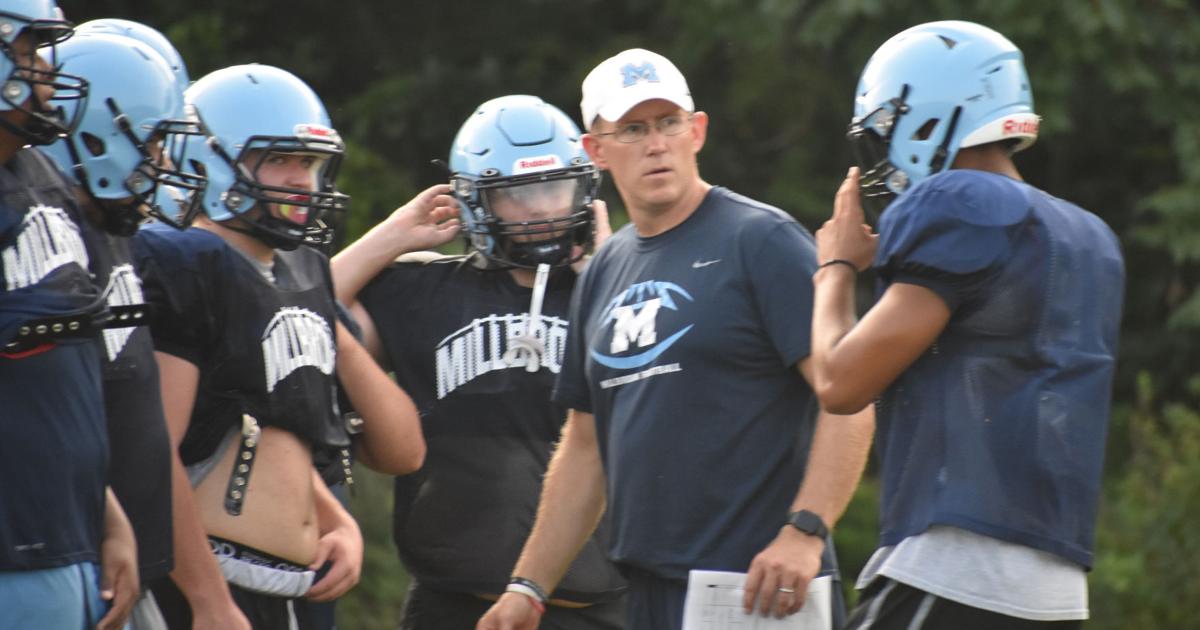 WINCHESTER — No one enjoys going through a 1-9 season, but it does provide anyone who endures it an opportunity to look at the mirror and examine ways to prevent a similar outcome.

For the first time in Millbrook’s 19-year school history, the Pioneers football team went 1-9 last year. In every other full 10-game season, Millbrook — which was 1-5 in the district — had won at least two games.

“I think we learned that we definitely need to come together a little bit more,” said Millbrook senior quarterback and cornerback Detric Brown after Monday’s practice, the first one held on the Pioneers’ campus in preparation for the 2022 season. “I think we learned that team chemistry is a lot more important than we thought it was. And we can’t ever go into a game thinking just because we have talent that we can win that game. We’ve got to actually put the work in and put the effort in.

The 2021 Pioneers did have some talent, as eight players earned All-District honors and five players went on to participate in college football signing ceremonies. But injuries and a bout of COVID-19 that resulted in Millbrook canceling its Sept. 17 game with Potomac Falls often meant the Pioneers were facing an uphill battle before kickoff. Millbrook head coach Josh Haymore noted the Pioneers didn’t even have a school athletic trainer for much of the season.

“They learned how to face adversity and they’ve found the love of the game for themselves,” Haymore said. “[Football] can be taken away at any given time. Love it while you got it.

“They’ve learned to appreciate every part of the game now. Whether it’s conditioning, whether it’s offense, defense, weightlifting. They have the love. I think that’s a big lesson to learn.”

The Pioneers feel they set a good tone for the season with their three-day camp at the Powhatan School in Boyce that was held Thursday through Saturday. It was the first time the Pioneers had held their Powhatan camp since 2019.

“It exceeded my expectations,” Haymore said. “Other teams players might moan and complain about certain things, but they didn’t do that. Every aspect of the game was like, ‘Man, we get to go play football again.’”

Haymore said the players did question one non-football related activity — clearing out all the weeds from a 40-by-30-yard playground area.

“They were like, ‘Why are we doing this?’” Haymore said. “And I told them, ‘Y’all are going to make a kid’s day. And you’re out here doing some work, you’re doing it together. You’re doing these things to give back to the community.’ Every little thing was work during the camp, and it was awesome.

“It definitely helped us get a lot closer through the fact that we spent three days all together,” Brown said. “We all had to go through a lot of hard running and hard conditioning. That time together really allowed us to get to know one another better.”

Millbrook — which has 40 players working with the varsity right now — won’t be short on experience as it looks to translate the lessons they’ve learned and the knowledge they’ve gained into a more productive 2022 season. The Pioneers feature five returning starters on offense and six on defense, and plenty of others who saw time.

“All of these guys we’re expecting to play have experience on the varsity level,” Haymore said.

The Pioneers will feature a three-year starting quarterback in Brown, who suffered a strained groin in the opener last fall and dealt it with the entire season. An Honorable Mention All-District selection who completed 140 of 272 passes for 1,864 yards, 14 touchdowns and 13 interceptions, Brown is receiving Division I interest. Other returning All-District players are senior Markell Harrison (Second Team offensive lineman) and senior Jett Helmut (Second Team defensive tackle with 50 tackles despite not playing a full season).