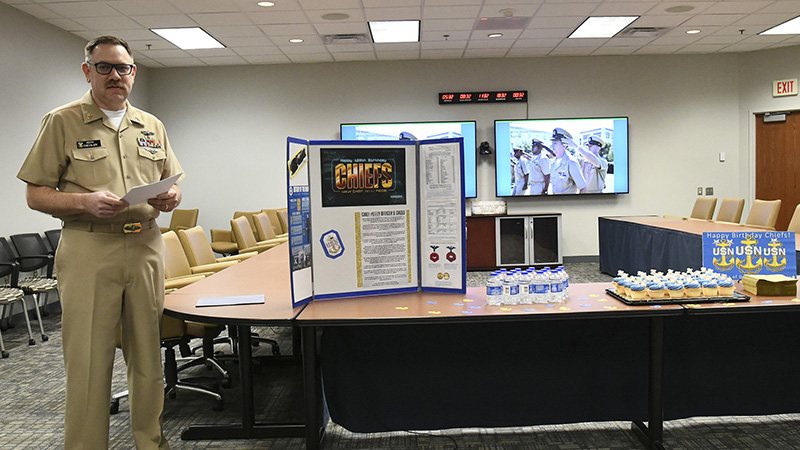 “It’s an honor and a privilege to wear the fouled anchors and to wear the rank of a chief Petty Officer,” stated NAVIFORs Senior Enlisted Advisor Master Chief Petty Officer Information Systems Technician Chris Boyson. “The task of training and mentoring our sailors is not something that I take lightly, and I enjoy doing it day in and day out, which is the definition of self-less service. I am in awe of everything that the CPO mess has accomplished and excited to see what is still yet to come.”

“The CPO birthday is a time for our chiefs to review and gain new knowledge about the history of being a chief and an occasion to “recharge” their anchors, studying and sharing the historical past and legacy of the chief with each other,” stated Vice Adm. Kelly Aeschbach, NAVIFOR commander. “Being a chief petty officer requires an absolute professional who is completely committed to service. Thank you to each and every CPO for your leadership.”

The earliest identified unofficial use of the time period chief petty officer dates to 1776, when the Continental Navy ship Alfred’s Jacob Wasbie, a cook dinner’s mate, acquired the title “chief cook.” The price of chief was formally established over a century afterward April 1, 1893.

There are at present three ranks of chief petty officer within the Navy: chief, senior chief and grasp chief. According to Naval History and Heritage Command, “Chiefs are recognized for exemplary technical expertise within their rating, superior administrative skills, and strong leadership ability. Most importantly, chiefs bridge the gap between officers and enlisted personnel, acting as supervisors as well as advocates for their Sailors.”

NAVIFOR’s mission is to “generate, directly and through our leadership of the IW Enterprise, agile and technically superior manned, trained, equipped, and certified combat-ready IW forces to ensure our Navy will decisively deter, compete and win.”

For extra info on NAVIFOR, go to the command Facebook web page at https://www.fb.com/NavalInformationForces/ or https://www.navifor.usff.navy.mil.