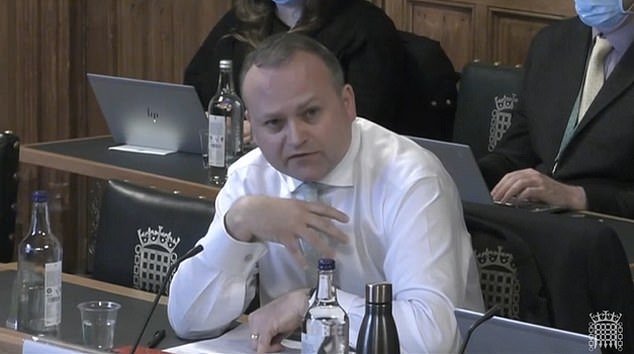 Cabinet minister Therese Coffey slapped down a Labour MP today after he asked if ‘gossip’ she was resigning was true – with a jibe at his own conduct.

The Pensions Secretary took aim at Neil Coyle over his own conduct after they clashed over benefit payments.

Ms Coffey appeared in front of the  Work and Pensions Committee this morning and defended the Government’s decision to uprate benefits based on inflation data from five months ago that pre-dates the recent cost of living rises.

In an exchange, Mr Coyle told the Work and Pensions Secretary it was ‘really disappointing that you’ve turned up and been unable to answer so many questions’, after she asked to come back to the committee about a question on ‘yellow card’ sanctions for those on benefits.

Offering a defence, Ms Coffey said she either did not recall some details or was being asked about other departmental briefs.

Mr Coyle followed up by asking: ‘There was a rumour the Secretary of State is going to resign. Is that the reason you can’t answer any questions today, because you’ve got one foot out the door?’

The Cabinet minister sharply replied: ‘No, don’t be ridiculous Neil. If you want to bring up gossip, I could bring up other stuff that happened downstairs. I don’t think that’s appropriate for this select committee, thank-you.’

At the weekend it was revealed Mr Coyle, the MP for Bermondsey and Old Southwark in London, has been suspended from House of Commons bars after he allegedly launched a foul-mouthed anti-Brexit rant in Westminster’s famous Strangers’ Bar last week.

In an exchange, Mr Coyle asked: ‘There was a rumour the Secretary of State is going to resign. Is that the reason you can’t answer any questions today, because you’ve got one foot out the door?’

The Cabinet minister sharply replied: ‘No, don’t be ridiculous Neil. If you want to bring up gossip, I could bring up other stuff that happened downstairs. I don’t think that’s appropriate for this select committee, thank-you.’

Staunch Remainer Neil Coyle is accused of bawling ‘f**k you’ at a Labour aide who insisted that Brexit had worked out ‘fine’ for the UK.

And when a Tory MP tried to intervene to calm the row, Mr Coyle allegedly replied: ‘F**k off and lose some weight.’

The row erupted on the very first day of the reopening of Strangers’ – Westminster’s famous Thames-side watering hole – for MPs and staffers after it was closed during the Covid pandemic.

Witnesses say that Mr Coyle, known for his pungent anti-Brexit views, brought the bar to a standstill on Monday evening with an expletive-laden rant at a young Labour aide who suggested the party had got it wrong on Brexit.

They say the MP erupted after the researcher, who works for another Labour MP, suggested that Brexit had not been a disaster for Britain.

The aide is said to have added that Labour could have been spared its disastrous 2019 General Election –where it argued for a second referendum – if only it had taken a different position.

Mr Coyle then allegedly startled everyone in the bar by yelling: ‘F**k you! What are the benefits of Brexit?’

He was also said to have shouted: ‘Are you f**king insane?’

And when a backbench Tory MP attempted to defuse the row, Mr Coyle is said to have retorted with ‘f**k off’ , followed by a dig at the MP’s weight.

At the hearing, Ms Coffey said it was a reasonable and sensible decision to base the annual increase for inflation-linked benefits and tax credits on data from last year.

Inflation-linked benefits and tax credits will rise by 3.1 per cent from April, in line with the Consumer Prices Index (CPI) inflation rate in September 2021.

But last week the governor of the Bank of England warned that inflation could hit 7.25 per cent by April and is unlikely to fall back to normal levels for two years.

Ms Coffey was asked by MPs if this will leave people in an ‘impossible position for the next year’.

She told the Work and Pensions Committee: ‘We have this consistent approach using the same index year on year… inflation moves around and I think it was a reasonable approach to continue with that consistency.’