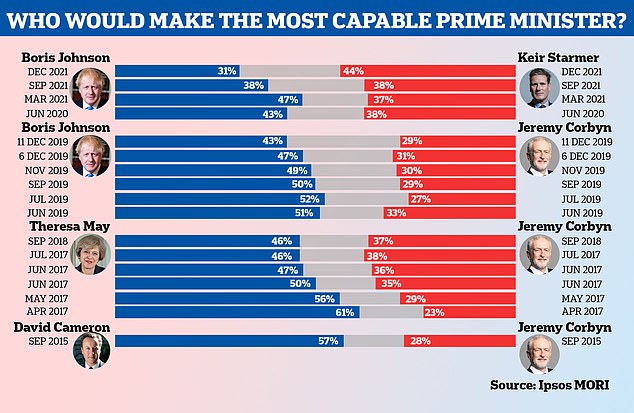 Boris Johnson has become the first Tory leader to trail on the ‘best PM’ rating since 2008 – as another poll showed Labour ahead.

A survey conducted by Ipsos MORI found 44 per cent of Britons believe Keir Starmer would make the most capable PM, while 31 per cent chose Mr Johnson.

That is the lowest proportion of support recorded for Mr Johnson since he became Prime Minister in July 2019.

Sir Keir’s 13 point lead represents the first time a Labour leader has been ahead of their Tory counterpart on this question with Ipsos MORI since Gordon Brown led David Cameron more than a decade ago.

The survey was conducted between December 3 and December 10 – covering the period before, during and after the row over the alleged Downing Street Christmas party erupted.

Meanwhile, a Survation poll has shown Labour stretching their advantage over the Tories amid the carnage, turning a five-point lead into seven points in just a few days.

The boost for Sir Keir came ahead of him addressing the nation this evening as he responds to Mr Johnson’s announcement last night to accelerate the booster jab programme.

A pre-recorded statement from Sir Keir is due to be played on BBC One at 7pm.

A Survation poll has shown Labour stretching their advantage over the Tories amid the carnage, turning a five-point lead into seven points in just a few days

The Ipsos MORI survey also found that satisfaction with Mr Johnson’s performance as PM has now fallen to its lowest level since he took the job.

The net score of minus 37 is down 10 points on what was recorded in November and is the worst he has scored as premier.

The poll gives the Labour Party a five point lead over the Tories on general election voting intention.

Labour was on 39 per cent of the vote, up three points on last month, while the Conservative Party was on 34 per cent, down one point.

The poll puts the Liberal Democrats on 11 per cent, up two points, and the Green Party down four points on seven per cent.

Gideon Skinner, head of politics at Ipsos MORI, said: ‘Boris Johnson and the Conservatives are feeling the chill.

‘Of course it is still only mid-term and things can change, but people told us they cared about the Downing St Xmas party, and the last few weeks have all added up to the Prime Minister’s personal brand taking a hit.’