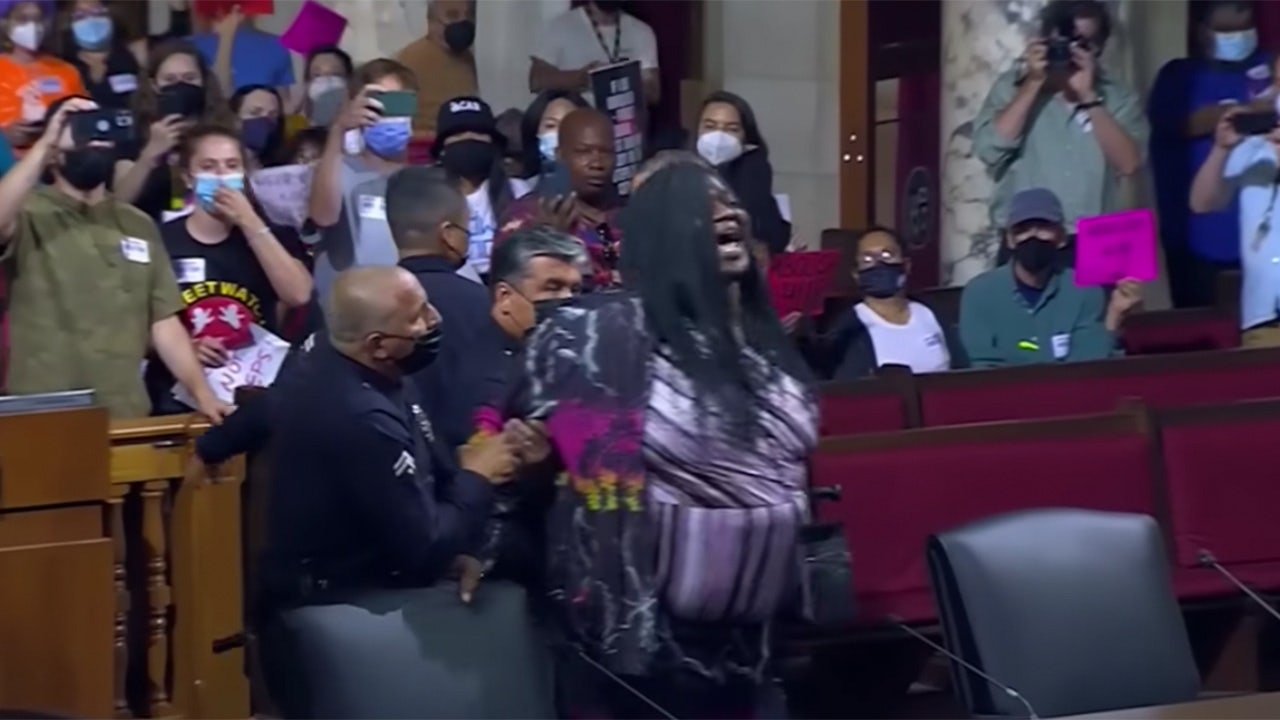 A Los Angeles City Council meeting on Tuesday where members voted to expand on a bill that prevents homeless people from forming encampments near schools, was disrupted by a group of protesters who broke through a security barricade and threatened the lawmakers.

A recess was called just before the council voted 11-3 to extend an existing ban on homeless encampments within 500 feet of schools and daycare centers in Los Angeles, as protesters who claimed the initiative would further isolate and negatively impact the homeless community disrupted the City Council meeting. Two people were arrested, the Los Angeles Police Department said.

Los Angeles City Councilman Paul Krekorian, who represents the Second District, described the protest as an “attack” that included verbal threats against the lawmakers.

“In yet another attack on constitutional democracy, for the second time in a week, a small mob of extremists today again shut down a public meeting of the City Council,” Krekorian said. “In the process, they breached a security barrier, physically threatened the Council, and attacked police officers. One of them was arrested two feet from my desk.”

During the incident, one sergeant and two Security Services Division officers, who are responsible for the safety and security of City buildings, were injured.

The Los Angeles Police Department confirmed the disruption and said one of the suspects who was detained was a woman who charged the city council members.

“Officers were involved in a minor use of force while attempting to make the arrests,” LAPD said.

A woman breached barriers at the LA City Council meeting and charged at lawmakers while yelling obscenities.
(KTTV)

Police officers eventually dispelled the protesters and order was regained in the chamber.

“The unlawful assembly was declared at 11:07 a.m., and the crowd was given 30 minutes to disperse. The crowd dispersed as ordered while the Media remained. At approximately 11:40 a.m., Council reconvened, voted and approved 41.18 LAMC.”

Tuesday’s vote expanded on a provision that cleared the chamber last week, also by an 11 to 3 vote, that initially barred homeless encampments to schools and daycares specifically identified by the council. Protesters similarly interrupted last week’s city council meeting on Aug. 2.

“There can never be any excuse or rationalization for this kind of anarchic lawlessness,” Krekorian added. “The people of our nation cannot tolerate raging extremists entering public buildings and threatening public officials with the intent to shut down the government, no matter what their viewpoints may be.”

Homeless encampments block the street on an overpass of the Hollywood freeway in Los Angeles, in July 7, 2021.
(AP Photo/Damian Dovarganes, File)

“Every Angeleno should be outraged by what happened today in their City Hall. Anyone who seeks to be a leader in this city must actively denounce this kind of nonsense in clear and unambiguous terms,” the council member continued.

Supporters of the blanket ban said it was designed to ensure the safety of children, many of whom walk near the homeless encampments on their way to school. Some encampments include people who use drugs or suffer from mental health conditions.

“This is something to protect kids in our city,” Council member Paul Koretz, who represents the Fifth District, said before the measure passed.

The bill’s opponents, however, said it “displaces” the homeless and criminalizes their condition.

“Enforcement of anti-camping ordinances, then, only displaces people and makes it harder for trained outreach staff to establish trust again. Residents of cleared encampments, unless connected to stable permanent housing through a trauma-informed case management process, often return to unsheltered homelessness,” the nonprofit People Assisting The Homeless, or PATH, said in a statement.

Protesters inside the chamber could be heard shouting “Abolish 41.18,” the law that dictates where homeless encampments can be located.

The city of Los Angeles includes about 750 public schools and nearly 1,000 daycare facilities, which will all be impacted by the ban.

Los Angeles Mayor Eric Garcetti must sign the ban before it takes effect.

The Associated Press contributed to this report.