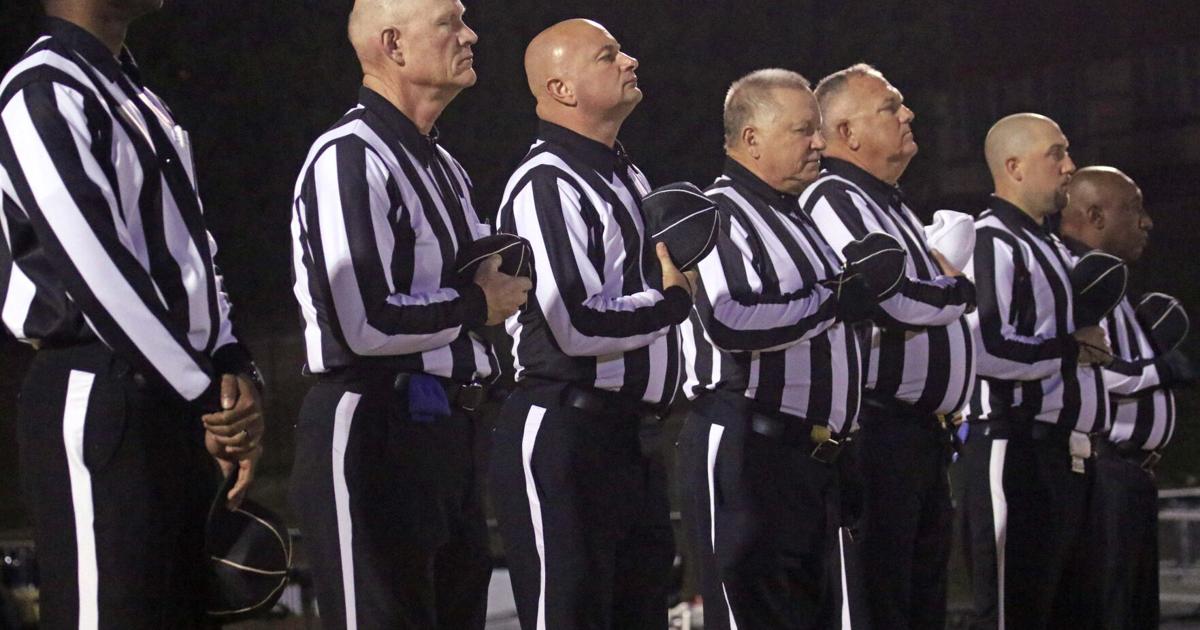 Five Prince William County high schools will have to play some of their home games on either Thursday nights or Saturdays instead of Fridays this fall due to a shortage of officials.

After receiving schedules for schools already under contract with the Northern Virginia Football Officials Association, Larry Kendrick, the association’s commissioner, informed the activities directors at Colgan, Forest Park, Freedom-Woodbridge, Gar-Field and Potomac on June 14 that he had room to handle some Friday night requests from those schools for this season.

But he could not accommodate everyone’s wish to cover all of their Friday games, and the two other local referee associations were already booked.

The Northern Virginia association had at least one open spot for most weeks during the 10-game regular season that runs from late August to early November. The only unavailable Friday dates were Sept. 9 and Sept. 23. One Friday (Sept 30) was completely open. The first Friday (Aug. 26) and Oct. 21 were non-factors since none of those five schools were home. Kendrick also had Friday, Sept. 2, open because most schools are playing the previous night due to the Labor Day weekend.

Want to become a football official?

If you’re interested in officiating local football games, reach out to the following organizations:

Rappahannock Valley: Covers 25 schools as far west as Culpeper, as far east as Warsaw, south toward Richmond and as far north as Woodbridge and Hylton in Prince William County.

The five schools hope to have their schedules ironed out by the end of this week.

Kendrick is trying to help anyway he can. Rivalries. Homecomings. Pep Rallies. Revenue from ticket sales. He understands why Friday nights matter so much to so many.

But certain realities make it impossible for the officials association to meet everyone’s desires, especially in Prince William, a place close to Kendrick’s heart. He graduated from Osbourn (now Osbourn Park) in 1972.

“I feel bad I had to do that, but I was bound by contracts,” Kendrick said.

Driving all this upheaval is a nationwide shortage of officials for high school and youth athletic events.

“It’s not going to get better,” said Kendrick, who has overseen the Northern Virginia association since 2019 and is entering his 48th year as an official. “Every year, we’re losing officials.”

On a national level, an estimated 50,000 high school officials left the profession between 2018 and 2021, said Dana Pappas, director of officiating services for the National Federation of State High School Sports.

Virginia had just over 7,000 officials this past school year, according to the Virginia High School League. That is up about 1,000 from the prior school year due to fewer COVID-19 pandemic restrictions. But overall, the numbers are down from the pre-pandemic years.

Due to the shortfall, some schools, primarily in southwest Virginia, are already switching their varsity football games to Thursdays or Saturdays.

Kendrick said the Northern Virginia association has dropped from 165 working officials in 2019 to 105 this season. Another local association, Rappahannock Valley, saw its numbers drop from about 110 to between 90 and 100.

To address the shortage and offer solutions, the national federation held a consortium April 12-14 to discuss the issue. Although not the only reason, the group’s 61 attendees identified poor sportsmanship as the primary reason why officials quit or why individuals show no interest in becoming an official.

“The consensus was that this type of behavior has become normalized. Unfortunately, it is almost expected that fans – sometimes coaches and others – will disrespect the men and women who are serving as officials,” wrote the federation’s chief executive officer, Dr. Karissa L. Niehoff. “Along those same lines, there is a lack of respect for the role of an official – adding another deterrent to becoming an official.”

Football officials prefer having at least a five-person crew these days to keep with pass-heavy offenses that stretch the field.

Time commitment is another reason organizations struggle to recruit and retain referees. Referees usually work day jobs and then have to officiate games in the evenings, as well as participate in training sessions. It makes for a long day.

Economics can play a role as well, but most people don’t become officials for the money. Northern Virginia association crews receive between $400 and $500 a game, split among the referees working the game, Kendrick said. Another local association, Bull Run, pays each of its officials $100 to $120 a game.

And the pandemic hastened the departure of older officials. Most officials in the local associations are 40 or older. Kendrick said his officials are typically in the 50- to 60-year-old range.

Without an infusion of younger officials, the associations are left scrambling.

Ideally, the local official organizations want at least five on-field referees for each game. Associations will provide a game clock operator as well unless the school wants one of their own staff members to handle that responsibility.

In some games last season, Kendrick said the Northern Virginia association used four on–field officials. But made it difficult to keep up with pass-oriented offenses. Each association also wants to ensure quality officiating out of fairness to the players, coaches and schools.

“The game is moving a lot more versus when it was smash-mouth football,” Kendrick said.

The referee shortage is forcing high school activities directors to juggle games and be creative with scheduling since the home team is responsible for providing referees. For example, Battlefield activities director Jason Koch said the Cedar Run District scheduled two field hockey matches last fall at the same site so they could use the same officials.

Spring sports such as baseball and softball that traditionally have played on Fridays often play on Thursdays instead. In some cases this spring, junior varsity softball games only had one umpire.

“Right now this is all so new and folks aren’t grasping how real this is,” Koch said about how the referee shortage is affecting scheduling and games themselves.

Prince William’s bus driver shortage has only compounded the scheduling challenges. No buses are available to transport teams to games until 4:30 p.m. at the earliest. For sports like tennis and cross country that begin earlier in the afternoon, parents often have to drive athletes to the events.

Some local coaches have even acquired their commercial driver’s license so they can drive team buses.

In dealing with the behavior issues, the national federation’s Niehoff said one solution would be to institute a “broad-scale nationwide campaign that addresses behavior and respect. While sportsmanship is always front and center in high school sports, this emphasis will go beyond the general tenets of sportsmanship.”

The Virginia High School League posts requests for new officials each week on its social media channels. The local commissioners help to spread the word as well.

The national federation has proposed targeting high school and college students, as well as women and minorities and military service members.

Better compensation might help too, especially with gas prices skyrocketing. All officials are independent contractors.

The referees’ associations remain sympathetic to schools’ plights, knowing there is only so much they can do under the current circumstances.

“Everyone wants to play on Friday nights,” said Rappahannock Valley commissioner Eric Barnes. “That’s where people make their most money. I wish I could help. I get it.”

To determine which schools received Northern Virginia association officials for this fall’s Friday night games, Kendrick had to give priority to the other schools in its coverage area (Fairfax County, Falls Church, Alexandria, Loudoun and Arlington) who had existing multi-year contracts with the organization. Loudoun is under contract through 2023 and the other four districts through 2025.

Prince William Public Schools and Osbourn, however, faced a different situation. Their contracts were up for renewal after expiring following the 2021 season. Kendrick said the Cedar Run District had a three-year contract with the Northern Virginia association and the five Cardinal District schools a one-year contract. Technically both ran out after the 2020 season, but each school received a one-year extension because the pandemic postponed the 2020 season into the spring of 2021.

In January, Kendrick emailed the five Cardinal Schools along with the six Cedar Run District schools from Prince William and the city of Manassas who used the association the previous year to tell them it appeared the organization could not officiate those schools’ varsity football games this fall if they were played on Friday night. The Cedar Run District’s other two schools (John Champe and Freedom-South Riding) were not impacted by the decision because they are in Loudoun and thus already under contract.

Following Kendrick’s suggestion to check for possible openings with the other two nearby officials associations, the Bull Run and Rappahannock Valley, Koch and Osbourn activities director Ira DeGrood took the lead for the Cedar Run, which preferred each of the county schools and Osbourn to use the same officials association to maintain consistency in scheduling.

DeGrood contacted Rappahannock Valley, which told him it did not have any openings.

Koch contacted Bull Run, which did have openings. The Bull Run football officials’ commissioner, John Joback, informed Koch on Feb. 1 they could work their Friday night games because they had room to take on six schools in addition to the three they provided officials for: (Brentsville, Kettle Run in Fauquier County and John Paul the Great in Dumfries).

The only exception was one one week in which two schools had to switch a game to Thursday.

“We were fortunate,” Koch said. “We did move fast.”

The lack of available football officials has forced some schools to play their varsity games on days other than Friday nights.

Woodbridge left the Northern Virginia association for Rappahannock Valley after the 2019 season. Hylton was the first county school to join Rappahannock more than six years ago after activities director Sal Colangelo heeded warnings by then NVFOA commissioner Dennis Hall of an impending referee shortage. Hylton was previously part of NVFOA.

“We made the decision and never looked back,” Colangelo said. “They are professional and on time and they were cheaper.”