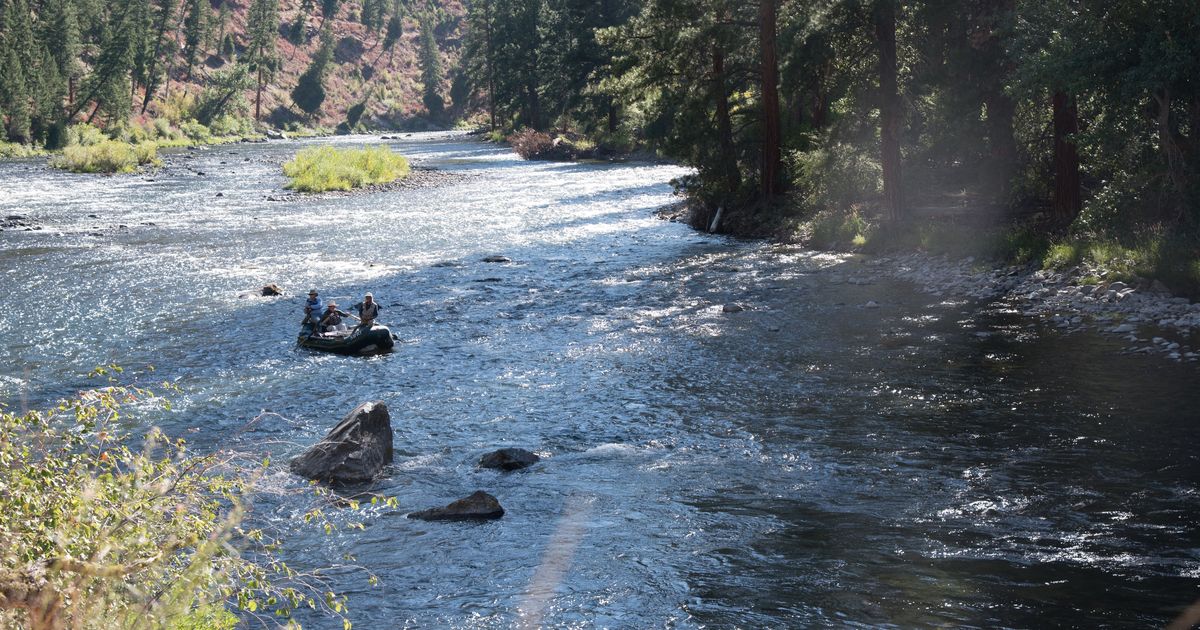 LEWISTON – As the planet warms, Idaho’s high-elevation streams may remain cold enough for spring chinook salmon, but lower flows will reduce the abundance and quality of spawning and rearing habitat, according to a soon-to-be-published study.

Snowpack-dependent flows have already dropped about 20% from levels recorded in the late 1950s. That decreased spawning habitat by about 10%. Flow velocity is down 17% and side channel habitat declined 6%.

But those losses are modest compared to what researchers led by University of Idaho professor Daniele Tonina predict will happen in the future.

“Before, the headwater streams were an ideal place,” Tonina said. “Now they will be less ideal.”

Tonina’s team used a new type of lidar, a remote sensing system, combined with hydraulic modeling, to predict how Bear Valley Creek, a tributary to the Middle Fork of the Salmon River, will change as air temperatures become warmer and more winter precipitation falls as rain instead of snow, and mountain snowpacks don’t persist as long into summer months.

Adult spring chinook return to freshwater in April, May and June as their name implies. But the fish don’t spawn until late summer. They need an ample supply of cold water to get them through the hottest months and to successfully spawn in gravel-lined streams. Likewise, their offspring need sufficient flows of water during their early freshwater life stage. The juvenile fish especially like slower-moving and slightly warmer side channel habitat where they can feed and escape predators.

The team mapped the stream and built models that indicate as the climate warms and less snow accumulates in the mountains of central Idaho, summertime flows in Bear Valley Creek will decrease 45% by 2040 and 72% by 2090.

Spring chinook spawn in shallow riffles. Tonina said when flows drop, shallow areas will be affected more severely than deeper pools. Previous studies focusing on climate change impacts to spring chinook habitat have largely focused on water temperatures. Although they show the temperatures will increase in Idaho’s mountain streams, much of the water will largely remain in a zone habitable for chinook.

Tonina’s study offers a further look at how unabated warming of the planet may further imperil salmon.

“We are getting close to a 50% reduction,” he said. “That is quite a strong reduction.”

“That is probably the most worrisome for us, a loss of connectivity with the floodplain,” he said.

Even so, Tonina said Bear Valley Creek will remain available to chinook and will likely support the fish at their current levels, which are well below historic averages and short of abundances called for in recovering planning documents.

The work, which will be in Geophysical Research Letters on Tuesday, is in line with a study published last year by scientists from National Oceanic and Atmospheric Administration’s Northwest West Science Center. That team found salmon will be severely affected across all life stages and ocean survival may plummet as much as 90%.

“I think it’s really important to recognize the challenges these fish are going to face. In even the highest elevation, most remote places, they are going to be facing challenges,” said Lisa Crozier, author of the 2021 report who was not involved in Tonina’s study. “We have ignored some of those. I think it is fantastic (Tonina and his team) are drawing attention to what can happen when you are restricted to limited habitat and summer flows go down.”

She is less optimistic than Tonina, saying the productivity of habitat in pristine areas already limited. She predicts chinook may respond to a drop in water availability by spawning later, when fall rains bump up low summer flows. Doing that will give their eggs the best chance of hatching, but it won’t be easy.

“It puts a lot of pressure on adults,” she said.

Crozier said fish may also retreat some from high-elevation areas to seek more water downstream. But those areas tend to be less pristine.

“I think it really puts pressure on us to restore some of the mid- to high-elevation habitat where there is water but the human impacts are huge.”

Tonina hopes others will duplicate the work and methods of his team to predict localized climate impacts and the impacts of other actions, such as withdrawing water from streams and rivers.

“We are now able to characterize how the habitat will change at the scale of a single fish, but over very long distances, and that will help us to have better constraints and quantify losses or gains in habitat,” he said. “And the methodologies are transferable to a lot of other systems and not just for climate change. It can be used to understand the impact of any other type of water management.”