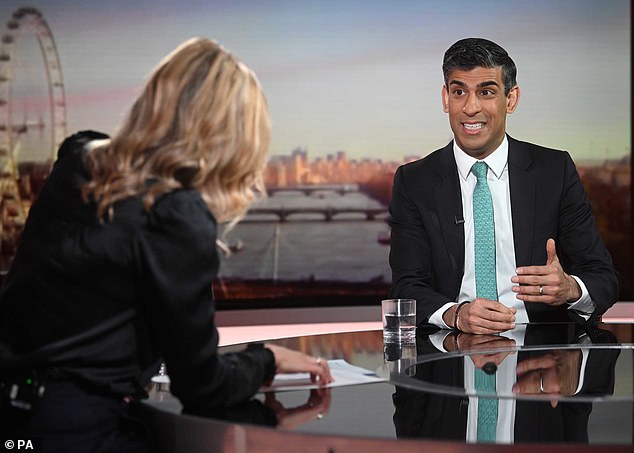 Rishi Sunak is poised to cut fuel duty this week in a bid to stave off a cost of living crisis.

But the Chancellor faced warnings last night that simply making petrol more affordable would be ‘too little, too late’ for many struggling families.

Mr Sunak had originally hoped to avoid major spending measures in Wednesday’s mini-Budget. But he is now considering a temporary cut in fuel duty of up to 5p per litre in the wake of the Ukraine invasion.

Hinting at the move yesterday, the Chancellor said he was determined the cost of filling up a car should not become ‘prohibitively expensive’.

And the Daily Telegraph reported last night that the Chancellor could ease the pressure of the 1.25 per cent NI hike by raising the thresholds at which people start to pay the tax.

Hinting at the move yesterday, the Chancellor tokd Sophie Raworth on BBC’s Sunday Morning he was determined the cost of filling up a car should not become ‘prohibitively expensive’

Speaking ahead of his Spring Statement, he said he would ‘stand by’ hard-pressed families, but warned he could not fully offset the impact of soaring prices.

Senior Tories welcomed the prospect of help for motorists last night, but urged Mr Sunak to go much further to tackle what looks set to be the worst cost of living crisis in half a century.

Former Cabinet minister Sir John Redwood said the Treasury should be cutting taxes now rather than trying to build up a pre-election war chest. Sir John, who was recently appointed to coordinate backbench policy proposals to the Government, urged Mr Sunak to inject £20billion of tax cuts into the economy now.

‘Taking a bit off petrol and diesel is fine and welcome, but if that’s all there is it will be too little, too late,’ he said. ‘We are facing a very big cost of living squeeze – perhaps the biggest of our lifetimes – and we need to be cutting taxes now to relieve that pressure.

‘The Chancellor needs to back off all the tax rises he was planning – the national insurance rise should not go ahead, we should cut VAT on fuel, and we should cut it on energy saving products like insulation too.’

Esther McVey, a former work and pensions secretary, said she had a ‘simple message’ for the Chancellor, adding: ‘We need to stop the National Insurance rise.’

The Daily Mail has led a campaign to spike the 1.25 percentage point hike in national insurance. Meanwhile, consumer champion Martin Lewis warned the impact of soaring energy prices was so great that Britain faces an ‘absolute poverty crisis’ unless Mr Sunak acts.

The MoneySavingExpert.com founder said the scale of the crisis was ‘not something money management can fix – we need political intervention’.

The warnings came as:

HOW COULD RISHI EASE THE PAIN?

Cut fuel duty: The Chancellor is considering a reduction of about 5p per litre in order to counter record prices at the pumps which have seen the cost of a tank of fuel soar to almost £100. Any cut is likely to be temporary, lasting six months or so.

Delay the rise in national insurance: Mr Sunak has come under sustained pressure to postpone the introduction of the new Health and Social Care Levy, which experts have dubbed ‘the worst timed tax rise in history’. But he fears a delay could lead to the tax being cancelled altogether and defended it again yesterday.

Raise national insurance thresholds: The starting point for paying NI is just £9,568 – well below the £12,500 threshold for income tax. Treasury officials have examined the case for raising thresholds to cushion the blow of the NI increase.

Verdict: Possible, but only on a limited scale.

More energy bill help: The Chancellor has offered a £150 council tax discount, coupled with the promise of a £200 ‘loan’ to help with energy bills this autumn. He is under intense pressure to do more, such as converting the loan into a grant or increasing its size. But the Treasury argues prices are too volatile to act now.

Verdict: Possible, but not until the autumn Budget.

Increase benefits: The Resolution Foundation argues today for pension and benefit payments to be increased by an additional 5 per cent this year to help those on low incomes cope. Mr Sunak has said he wants to target help at these people, but is reluctant to do anything that ‘bakes in’ higher payments for the long term.

Record rises in petrol and diesel prices have seen the cost of filling up cars and vans soar in the wake of the invasion of Ukraine. Mr Sunak, who originally planned a ‘policy-light’ economic statement this week, has come under mounting pressure to act.

‘People are really terrified about the literal triple whammy that they are facing, whether it is petrol and diesel costs at the pumps, the high energy bills and also general household bills as well,’ he said.

Buoyant tax revenues and positive economic forecasts are expected to give the Chancellor tens of billions of pounds of ‘headroom’, which could be used to ease pressures on families, although Treasury sources yesterday played down predictions he could have as much as £50billion. Treasury chief secretary Simon Clarke said any help would be prioritised for those most in need.

He told LBC Radio: ‘We get that this is tough. The question is how best do we spend the headroom we have to meet need?’ Yesterday, the Treasury declined to specify what measures the Chancellor might take.

In a round of interviews, Mr Sunak ruled out abandoning next month’s £12billion national insurance rise. But speculation was mounting he might soften the blow by raising the threshold at which people start paying the tax.

He also hinted that a cut in fuel duty was on the way.

He said voters in his own North Yorkshire constituency were ‘incredibly reliant on their cars’, adding: ‘This is one of the biggest bills that people face… We are all seeing that when we are filling up our cars.’

He went on: ‘We recognise the importance of people being able to fill their cars up and [it] not being prohibitively expensive.’ A final decision on any move will not be taken until tomorrow.

But experts predicted the Chancellor will now deliver a cut to fuel duty he had all but ruled out just a fortnight ago.

Shadow chancellor Rachel Reeves said Labour would back a 5p cut in fuel duty but warned it would ‘only reduce filling up the car with petrol by £2’.

Sunak tax hike ‘will clobber the economy by £24billion’

By Tom Witherow for the Daily Mail

The economy will be £24billion smaller if Chancellor Rishi Sunak goes ahead with a national insurance hike, according to analysis.

The report, from Europe Economics, found that two-thirds of the amount raised will be lost to sluggish economic growth.

Next month workers will pay an extra 1.25 percentage point of national insurance (NI) just as households are facing an estimated £2,000 hit from soaring prices and energy bills.

The tax hike, which will fund NHS catch-up programmes and social care reform, means workers on the average salary of £26,000 will pay an extra £164 per year.

New modelling published today found that GDP will be £24billion per year smaller by 2032 as a result of the change.

The United Kingdom will also miss out on £6billion of investment each year, according to the analysis, which was commissioned by the TaxPayers’ Alliance.

The campaign group’s chief executive John O’Connell said: ‘Bumper growth is what we need to tackle the colossal cost of Covid, not tax hikes, which will see jobs and investment stall.’

The Daily Mail has led the charge against the NI rise through its Spike the Hike campaign but Mr Sunak is not expected to scrap the rise in his Spring Statement on Wednesday.