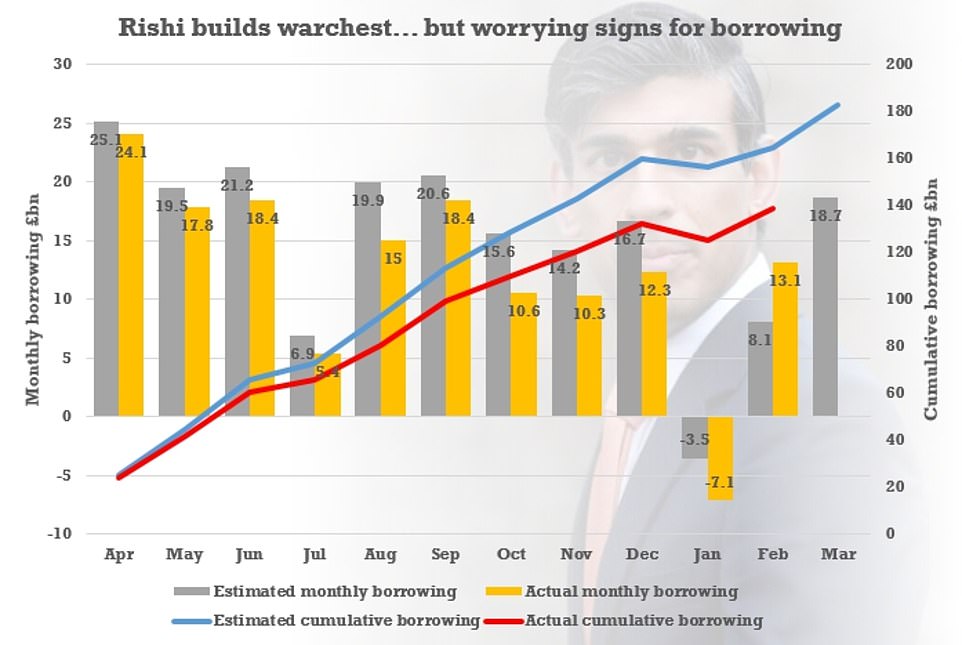 Anticipation is growing that the Chancellor will heed calls from MPs for a reduction – perhaps as much as 5p – in response to soaring pump prices.

However, the government has insisted there will be no rethink on the £12billion national insurance hike – although there is speculation thresholds might be raised to ease the impact.

And the Chancellor warned this morning that ‘global shocks’ meant it is ‘more important than ever’ to take a responsible approach to the public finances.

While borrowing in the year to date is below estimates, it was significantly higher in February as the economy slowed down even before the Ukraine war.

And payments on the UK’s debt mountain were a record £8.2billion last month, up 52.7 per cent on a year earlier due to being linked to inflation.

However, experts pointed to a ‘bumper year’ for tax receipts, with inheritance tax bringing in £5.5billion in the 11 months to the end of February – surpassing the previous record high for the full 2018-19 financial year.

Mr Sunak tried to play down his wriggle room ahead of the Spring Statement, saying: ‘The ongoing uncertainty caused by global shocks means it’s more important than ever to take a responsible approach to the public finances.

While borrowing in the year to date is below estimates, it was significantly higher in February as the economy slowed down even before the Ukraine war

How will Rishi use his warchest?

The Treasury has been playing down the scale of the Spring Statement, but Rishi Sunak has been given some much-needed wriggle-room to ease the cost-of-living crisis by UK plc’s better-than-expected performance.

Strong tax receipts have helped keep the government’s deficit around £30billion lower than the OBR expected at the time of the October Budget. Meanwhile, his existing plans to freeze tax thresholds are set to bring in around £12billion more than anticipated due to soaring inflation dragging people deeper into the tax system.

Here are some of the Chancellor’s options:

The Health and Social Care Levy has been dubbed ‘the worst timed tax rise in history’. Delaying it would be a one-off hit to the finances, which experts say would be affordable. But Mr Sunak has stubbornly defended the policy and will fear if it doesn’t go ahead this April it never will closer to an election.

Under huge pressure from Tory MPs, the Chancellor has been considering a reduction of about 5p per litre in order to counter record prices at the pumps. Any cut is likely to be temporary, lasting six months or so.

The starting point for paying NI is just £9,568 – well below the £12,500 threshold for income tax. Treasury officials have examined the case for raising thresholds to cushion the blow of the NI increase. However, such a move would be eye-wateringly expensive, and would benefit the wealthiest as well as the poorest.

The Chancellor has offered a £150 council tax discount, coupled with the promise of a £200 ‘loan’ to help with energy bills this autumn. He is under intense pressure to do more, such as converting the loan into a grant or increasing its size. But the Treasury has insisted there will be no move in the Spring Statement as the cap on energy bills does not change until October.

‘With inflation and interest rates still on the rise, it’s crucial that we don’t allow debt to spiral and burden future generations with further debt.’

However, in a hint that measures will be brought forward in the Spring Statement he added: ‘Look at our record, we have supported people – and our fiscal rules mean we have helped households while also investing in the economy for the longer term.’

Government borrowing stood at £13.1billion in February, down by £2.4billion from the same month a year earlier, according to official figures.

The Office for National Statistics (ONS) said that despite the fall, this was the second highest February borrowing since monthly records began in 1993 and was still £12.8billion more than in February 2020, before the pandemic struck.

In the financial year so far, borrowing reached £138.4billion, which was less than half of the £290.9billion borrowed in the same period last year.

It was also well below the £164.3billion the Office for Budget Responsibility watchdog had pencilled in at the last Budget in the Autumn.

However, interest payments on the Government’s debt soared to a record £8.2billion last month, up 52.7 per cent on a year earlier, due to soaring levels of the RPI measure of inflation used on Government debt payments.

Mr Sunak is said to be considering an increase in the rate at which workers start paying the levy in order to ease the burden on the low paid.

While the threshold for paying income tax has increased rapidly in recent years to £12,500, the starting level for national insurance has lagged behind.

Most workers currently start paying NI when their income hits £9,568.

Mr Sunak has come under intense pressure to drop the 1.25 percentage point increase in the tax, which has been rebranded as the ‘health and social care levy’.

Experts have described it as the ‘worst-timed tax rise in history’, warning it will fuel inflation and hit family incomes at the least opportune moment.

But Mr Sunak insisted at the weekend that the tax raid would go ahead to fund action on tackling the post-pandemic waiting lists in the NHS.

Keir Starmer accused the Chancellor of ‘cynically’ bringing in a big tax rise now so that he can cut before the next election.

‘If ever there was a time not to introduce a new tax, it’s now, when the squeeze is absolutely on,’ the Labour leader told BBC Radio 4’s World at One.

‘And he’s not doing that for good economic reasons. He’s doing that, he hopes, so that just before the election he can try to cut taxes and claim to be a tax cutting government. That is cynical. It is not the right economic answer. It is cynicism.’

The ONS said the jump in UK debt interest payments is down to the recent surge in the Retail Prices Index (RPI) measure of inflation, which determines payouts on index-linked gilts.

RPI rose to its highest level since March 1991, hitting 7.8 per cent in January, up from 7.5 per cent in December. Inflation for February is revealed tomorrow morning.

Public sector debt, excluding public sector banks, remained at a level not seen since the early 1960s – at £2.3trillion at the end of February, or around 94.7 per cent of gross domestic product (GDP).

Investec economist Sandra Horsfield said some helpful revisions in the ONS back data ‘leaves a fiscal-year deficit for 2021-22 of £150 billion or perhaps even less entirely within play, far below the £183 billion the OBR had pencilled in at the time of the Budget.

‘Such a material undershoot will add to room for manoeuvre for Mr Sunak to help buffer some of the cost-of-living crisis at tomorrow’s spring statement.’

Former Tory leader Sir Iain Duncan Smith has urged the Chancellor to postpone the tax rise altogether but added that a rise in thresholds could help to limit the damage.

‘Tinkering with the thresholds will obviously help but the reality is that the Chancellor should be dropping this tax,’ said Sir Iain.

‘We should be going for growth or we are going to end up with stagflation. Instead we are placing another burden on families and businesses.’

VAT has shown a massive increase, although that is largely due to the end of the period of deferral during the pandemic

Torsten Bell, chief executive of the Resolution Foundation think-tank, said yesterday that ‘good news on the public finances’ meant the Chancellor had significant headroom to act.

Mr Bell added that raising NI thresholds would ‘help those on middle incomes most’.

He told BBC Radio 4’s Today programme that Mr Sunak should prioritise an increase in pensions and benefits to help those on the lowest incomes to cope with the biggest squeeze on family finances since the 1970s.

‘If he’s got more money to spend then raising NI thresholds… should be the priority,’ added Mr Bell.

Mr Sunak is also finalising plans for a temporary cut in fuel duty to help offset record rises in petrol and diesel prices amid the Ukraine crisis.

Mr Bell said a fuel duty cut, reported to be about 5p a litre, was ‘an absolute certainty to be a big part of the package’.

However, No 10 stressed that the Chancellor would be unable to offset fully the huge rises in costs.

The Prime Minister’s official spokesman said: ‘Obviously the Government cannot deal with all of the challenges when they come on a global scale.’

British Chancellor of the Exchequer Rishi Sunak speaks at Conservative Party Spring Conference in Blackpool.  He is said to be considering an increase in the rate at which workers start paying National Insurance