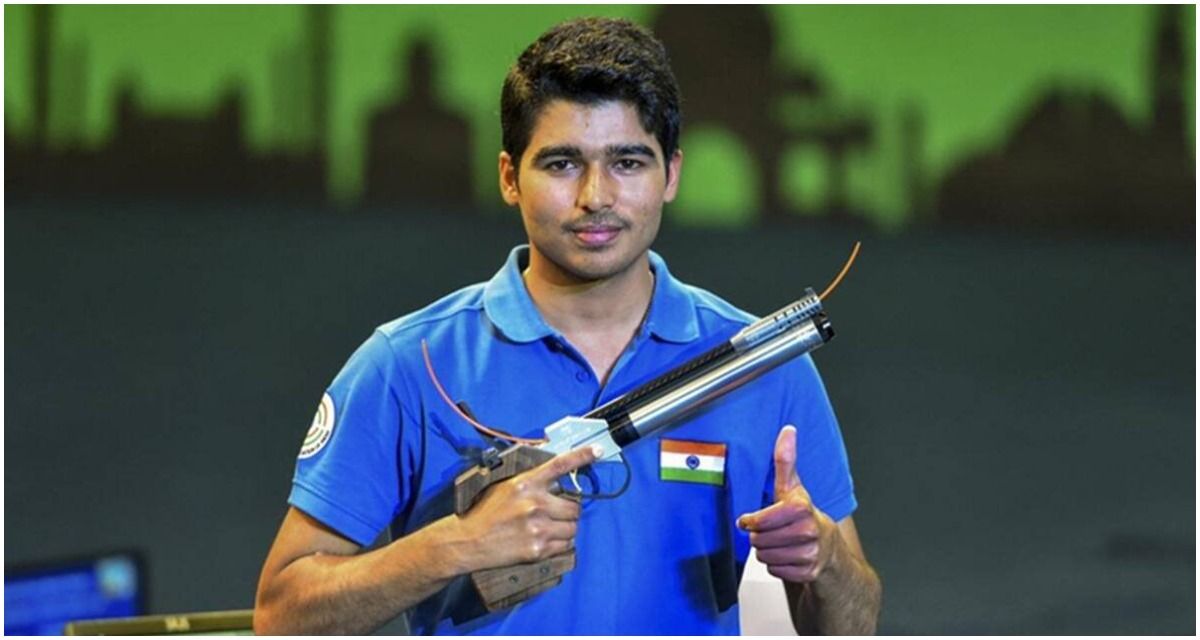 Esha Singh bagged the second medal for the country after she won a silver in the women’s 10m air pistol event. After winning multiple ISSF medals in the junior ranks for a few years, this was Esha’s first medal in the India senior colours. Also Read – Sarabjot Singh Crowned New Men’s Air Pistol National Champion

India now top the medals tally with one gold and one silver in its kitty. Also Read – International Shooting Federation Increases Asia’s Olympic Quota Places From 38 to 48

The Asian Games gold medallist Chaudhary shot 16 in the gold medal contest to finish ahead of Germany’s Michael Schwald (6).

The bronze in the event was bagged by Tokyo Olympics silver medallist Artem Chernousov of Russia, whose country’s flag was removed owing to its involvement in the ongoing conflict with Ukraine.

The 19-year Chaudhary, an Olympian who also has a Youth Olympic gold medal to his name, was third in the men’s 10m air pistol qualification stage with a total of 584 points, making it through to the elimination as one of the top eight shooters.

This was Chaudhary’s third individual ISSF World Cup gold and first in the new format, dominating Germany’s Schwald in the final.

In the women’s 10m air pistol event, Esha went down to reigning world champion and world number one Anna Korakaki of Greece 4-16 in the gold medal match.

Shooting in an 80-strong field consisting of the top two at Tokyo Olympics besides Korakaki, Esha shot a solid 578 to finish sixth in the 60-shot qualifying round to make it to the second semi-final.

Esha trumped Korakaki along with the likes of Tokyo Olympics silver medallist Vitalina Batsarashkina of Russia to top the round with 41.5 points and sail through to the medal round. Korakaki followed her there with 40.

In the medal round, Esha and Korakaki met no less than Olympic champion Antoaneta Kostadinova of Bulgaria and Sandra Reitz of Germany, who had made it there from the first semi-final.

They remained relentless, shooting just three scores in the 9s out of 12-shots with Korakaki topping the field with 37 points as Esha too deservedly earned her gold medal match spot with 35.5 points.

Kostadinova had to settle for bronze, finishing with 26.5 points.

In the gold medal match, Esha kept up with the world champion for the first five shots with the score reading 4-6. But Korakaki stamped her class in the end, racing through the next five shots with consistent high inner 10s, reaching the required 16 points to close out the match.

Chaudhary made it to the medal round along with Chernousov for company as both notched up 38 points to eliminate Robin Walter of Germany first and then Emis Vasermanis of Latvia. In the first semi-final, the first of four athletes were eliminated after 10 shots and the second after 15.

In this round, the shooter with the highest single-shot score is awarded four points, while the others get three, two and one each respectively, as they move down the hierarchy. Points are split in case of a tie. This format continues till the medal round.

Schwald and Azerbaijan’s Ruslan Lunev were the other two shooters to make it to the medal round from the second semi-final.

In the medal round where the bronze winner is determined and the top two make it through to the gold medal match, Chaudhary topped the four-man field after 15 shots with a score of 42.5 points.

Schwald joined the Indian with 41.5 points while Chernousov had to be satisfied with bronze, finishing with 40. Lunev finished fourth, bowing out after 10 shots with a score of 21.

In the final, the winner of a single shot is awarded two points and the first to 16 points wins. In case of a tie, each shooter gets a point. Chaudhary needed just 11 single shots, including shots of 10.5, 10.8 and 10.6 in the last three of his four attempts to seal the deal in his favour.

Wednesday has six finals — all of them team competitions — and promises more medals for India.

Over 500 shooters from 60 nations are taking part in the Cairo World Cup which has 20 medal sets on offer.