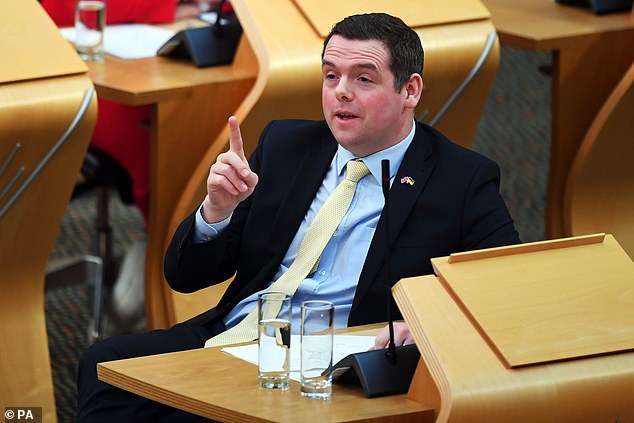 By Michael Blackley Scottish Political Editor For The Daily Mail

Douglas Ross has attempted to end his feud with Boris Johnson by urging his party to end all talk of his resignation.

The Scottish Conservative leader was the most senior MP to call for the Prime Minister to quit over the Partygate furore.

But he has now said that all talk of his resignation should be paused while there is war in Europe.

He insisted that the Prime Minister has the backing of the whole Scottish Conservative party in responding to the actions of Vladimir Putin.

Mr Ross also confirmed he is withdrawing the letter of no confidence in Mr Johnson that he submitted to 1922 committee chairman Sir Graham Brady.

The dramatic change of position comes as it was announced that Mr Johnson is now scheduled to attend the Scottish Conservative conference in person next weekend.

He had previously been expected to attend only by video link following the breakdown in relations with Mr Ross and other senior Tories.

Mr Ross, the MP for Moray and MSP for Highlands and Islands, said: ‘The middle of an international crisis is not the time to be discussing resignations, unless it’s the removal from office of Vladimir Putin.

‘There will be a time and place to debate Partygate but, as even Keir Starmer said at the weekend, we should put that on pause while there is war in Europe.

The Scottish Conservative leader was the most senior MP to call for the Prime Minister to quit over the Partygate furore.

But he has now said that all talk of the PM (pictured today in Birkenhead) resigning should be paused while there is war in Europe.

‘It’s essential that we all fully support what the UK Government is doing. In light of Russia’s appalling actions, the government and Prime Minister need our backing, and they have mine and the whole Scottish Conservative party.

‘We should all be focused on what we can do to help the Ukrainian people in any capacity.’

He first said in December that the Prime Minister should quit if he misled parliament over a Christmas party.

He then said in January that Mr Johnson’s leadership was ‘no longer tenable’ after he admitted that he attended a Downing Street party during lockdown.

Mr Ross reiterated his call when the Sue Gray report was published, and highlighted a section which said that there was a ‘serious failure to observe’ the standards expected to the entire British population at the time.

The comments led to a major breakdown in relations between the Scottish Tories and Downing Street, with Jacob Rees-Mogg dismissing Mr Ross as a ‘lightweight figure’.

But Mr Johnson offered an olive branch in an interview with the Mail during a visit to Scotland last month, by lavishing praise on Mr Ross’s performance and insisting there is ‘far more that brings us together than separates us’.

He also insisted they will both ‘of course’ still be in post at the next general election.

Mr Johnson was initially expected to not be invited to the Scottish Tory conference, which takes place in Aberdeen next weekend, but it was subsequently agreed he would give an address by video link.

However, the event is now expected to be dominated by the Ukraine crisis and it has now been agreed that the Prime Minister will attend in person.

A senior Tory source said: ‘It was originally likely that the Prime Minister would address conference in a video.

‘The war in Ukraine has changed the situation. This crisis is bigger than any disagreements we may have. In light of Russia’s appalling actions, we asked that the Prime Minister address conference in person.’

Kirsten Oswald, the SNP’s Westminster deputy leader, said: ‘This is a major blow to Douglas Ross’s credibility and authority as Scottish Conservative leader – he has been humiliated and left to look utterly ridiculous.

‘It beggars belief that Boris Johnson and Douglas Ross both believe they can remain in office and work constructively given everything that has happened in recent months.

‘If Boris Johnson refuses to do the right thing and resign, then people will rightly question Douglas Ross’s position.’