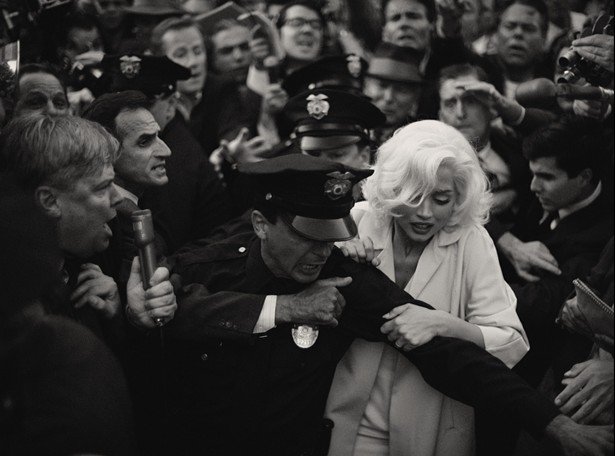 Say what you what will about Andrew Dominik’s “Blonde,” but I suppose it isn’t the skittish, glorified book on tape that often results from filmmakers tackling esteemed source material. Dominik takes Joyce Carol Oates’ free-associative bear of a novel about the inner life of Marilyn Monroe and makes it his own, attempting to match the author’s audacity with bold new flourishes. The problem is that the flourishes are literal-minded and ghoulish, blunt and broad and insulting. Dominik homes in on the novel’s worst quality—its relentless masochism—while throwing out everything that made it a daring and imaginative work of art.

In Oates’ book from 2000, Monroe was a phantom, a highly coveted, profoundly abused embodiment of American fantasy, created by a young woman, Norma Jean Baker, and a coven of Hollywood ghouls embedded within the classic studio system. The irony was that Baker yearned as hard as any of the fans who fantasized about her, haunted by abandonment issues that included a missing father, an insane mother, and endless sexual trauma. In the book, we gradually see Marilyn Monroe snap into place as a voluptuous siren born of a thousand nightmarish cuts to Norma Jean Baker, who is eventually erased.

Oates understands Marilyn Monroe to mean everything and nothing as an American icon, signifying the populace’s need to objectify stars and escape the ordinary lives that Baker herself may have killed for. To feel right, we’re conditioned to need to be, or at least feel incredible, a need that’s supposed to be satisfied by consuming more of the pop culture that intensified our sense of inadequacy to begin with. Marilyn’s unsustainable fantasies of being accepted by her parents, and of being taken seriously as an artist and intellectual, were transmitted on screen in her films, where they fused with her beauty to become our fantasies of acceptance. The relationship between star and spectator is a roundelay of unfulfilled parasitism.

Oates sold these ironies very persuasively, but what keeps her “Blonde” from being a dull sermon is her understanding of Marilyn as an artist, as well as her willingness to plumb the souls of even the characters she holds in contempt. An early scene in Dominik’s “Blonde” typifies his method of boiling ambiguous, poignant passages down into cheap messages. In the book, Marilyn, freshly invented, auditions for a filmmaker that’s supposed to represent John Huston, for a role in “The Asphalt Jungle.” For a moment, Oates takes us into Huston’s psyche, as he wonders about the potential genius of Monroe’s simultaneously affected and unaffected acting, about her potential effect on the movie, about her strength and personality, about how his impressions might all be bullshit.

In a matter of a page or two, Oates gives us a piercing analysis of Monroe’s gifts and Huston’s insecurities. The punchline is a kicker: After running through so many nuanced thoughts in a matter of seconds, rich in the sort of feedback for which Monroe so fervently craves, Huston says to the crew simply that she has a nice ass. Oates understands how men hide behind sexism, and how they hurt themselves and women in the process. In the movie, Dominik drops the Huston scene entirely and gives the “nice ass” line to a piggie studio executive, and so all the scene does is reinforce our preconceived notions of Marilyn Monroe as the pinup bimbo victim and of men in general as pompous vampires.

By this point in the film, “Blonde” is already suffering from Dominik’s decision to jettison the first half of Oates’ book more or less entirely. Norma Jean’s elaborate process of becoming Monroe is elided, and so we don’t feel the disturbing catharsis of seeing a highly desired phantom born of a young woman’s alienation. We don’t see Norma Jean’s first marriage, in which she attempted to play at all-American normalcy, the sort of normalcy that presumably runs through the lives of her eventual fans. Because Dominik refuses to dramatize any of this pivotal background, he has to have characters talk about it, endlessly, and so we understand Marilyn as an illusion born of loss on an intellectual rather than emotional level. It was Oates’ emotion that made the book profound; intellectually, this is routine psychoanalysis.

Across the film’s 167-minute running time, a human rights violation in itself, it becomes increasingly difficult to shake the impression that Dominik couldn’t figure out how to lick the book and has retreated into art tricks to obscure his failures. Communicating a character’s evolution over decades is quite difficult in comparison to rendering her a thematic symbol and reducing her life to a series of disconnected scenes. Certain reviews have referred to “Blonde” as a collage, which is correct but too kind. Each scene is a stilted, reductive declaration of principles, the same principles over and over. In its favoring of flashy style over portraiture, in its inability to capture even rudimentary notions of how business and personal politics intersect, Dominik’s “Blonde” suggests an emo version of Baz Luhrmann’s “Elvis,” which at least had the courage to own its superficiality.

Oates bothered to dramatize Marilyn’s relationships with people who’re obviously Joe DiMaggio, Arthur Miller, and, most wickedly, John F. Kennedy. Dominik accords these unions a handful of scenes a piece, omitting the flush of pleasure, the flush of possibility, that might’ve emboldened each one, at least initially. All we see over and over is violent, pretentious, indifferent men using Marilyn to gratify their own need and vanity. Marilyn’s own complicity and calculation in these relationships is erased. Oates interrogated, and ultimately annihilated, the gross notion of Marilyn as a living sex doll. Under the guise of empathy, Dominik reinforces it. Every once in a while, a human scene pokes through, seemingly by accident. Adrien Brody has a wonderful moment as Miller, when Marilyn offers an astute observation on a woman who has long preoccupied him. Brody allows us to see the parting of the skies for an egghead, and how that could’ve easily become love.

Most of Dominik’s artistic imagination appears to be devoted to fiddling with aspect radios and color stocks and showoff POV shots. The logic of the aspect ratios is fairly straightforward, often pertaining to Marilyn’s sense of constriction, and to contrasting her private world with her public myth—an idea that doesn’t wash, since we don’t see her private self. The logic of the color stocks, by contrast, seems to mostly be a matter of passing fancies. There are stunning recreations of “Don’t Bother to Knock,” “Niagara,” and “Gentlemen Prefer Blondes” that exist as isolated pleasures, the Technicolor of the latter two punctuating the misery of the black-and-white that dominates “Blonde.” Sometimes, Miller and Monroe are seen in color too, and while the cinematography is ravishing, the emotional point feels arbitrary.

Dominik’s other governing interest is his casting coup, understandably. Ana de Armas plays Monroe, and she is stunning. De Armas vividly communicates the ferocity of her thoughts as she reads a room or a scene, desperate to please. Some of the film’s most brutal moments, concerning the stripping of Monroe’s dignity and the primacy of her need, are heartbreaking because de Armas plunges into them, even if the material is facile and condescending. Her self-consciousness as an actress mirrors Monroe’s, as we’re seeing a modern actor trying on the personality of an icon, collecting or discarding traits in the ongoing process of cultivating a personality that was growing too big for her. De Armas is astonishingly beautiful as well, but not quite Monroe—in a good way. That disconnect suggests Norma Jean inside the icon, peeking from deep into her soul, hidden under vast layers of roleplay and psychological scar tissue.

Halfway into “Blonde,” it occurred to me that Dominik is probably trying to make a David Lynch movie, and the point of his version of “Blonde,” which is virtually incoherent without knowledge of the Oates novel, crystallized. Dominik appears to be trying to fashion a film of cleansing brutality, in which Monroe died for our collected, pop culture-inoculated sins, particularly for our lust and resentment, which must be satiated regardless of the human cost. This is also the theme of “Twin Peaks: Fire Walk with Me” and “Mulholland Drive,” both of which have Monroe’s origin story swimming around in their DNA. Lynch once wanted to make a direct film about Monroe, and certain scenes in “Blonde” suggest that Dominik is shouting to him from across the aisles.

The filming of the street grate scene in “The Seven-Year Itch,” for instance, which Dominik shows from multiple angles, fashioning a mosaic of longing and estrangement, recalls images from “Mulholland Drive,” where a beautiful woman caught in the merciless glare of spotlights signifies the personal cost of our collected fantasies. Meanwhile, the general hopelessness of “Blonde,” its inability to conceive of even a moment of pleasure for a woman who seemed to have the world by a string, recalls the despair of “Fire Walk with Me.” The difference is that Lynch showed us two Laura Palmers: the private and the public, the wounded lover and friend and siren alike. Dominik only sees a victim, a sacrificial lamb for his art doodle’s Big Statement. Dominik’s “Blonde” is undeniably a big swing, but it’s also a macabre and egocentric misfire. Dead from head to toes.

Ti West’s “Pearl” is also about a woman with a yearning for love and Hollywood. It’s an agreeably slight, spright prequel to West’s “X” from earlier this year, showing how that film’s villain, Pearl (Mia Goth), grew into her insanity.

It’s 1918, and Pearl is about the age of Goth’s Maxine, the second role she played in “X.” Pearl wants to be an actress in the movies, but her mother, Ruth (Tandi Wright), a German immigrant traumatized by World War I, the Spanish flu, and a severely handicapped husband (Matthew Sunderland), encourages her to settle for their boring, miserable life on the farm that will eventually host the slaughter of “X.”

West embraces the lack of suspense inherent to a prequel, spinning it into an advantage. We know Pearl is a killer and that she will not be an actress because this movie has to set us up for “X.” This knowledge allows West to avoid certain kinds of overfamiliar pathos, like taking Pearl’s acting dreams particularly seriously. The suspense here resides in how precisely she will go bad, and in just how robustly awful it will be. Embracing a cheeky tone and a beautiful Technicolor palette that has something to do with “The Wizard of Oz” for some reason, West openly encourages us to root for Pearl cracking up. He’s entirely, unapologetically on Pearl’s wavelength, and he builds a pedestal for Goth in the process. West’s awe of Goth, which is justified, is unusually courtly for a horror movie director. Courtlier, in fact, than Dominik’s trivializing of Marilyn Monroe.

It may sound unbelievable to people who haven’t seen these movies yet, especially given their respective levels of prestige, but West and Goth build a better tormented artist than Dominik. West understands that miserable people can sometimes have fun anyway, and that there is a difference between what people show to society and how they are when they are alone.

Pearl’s restless creative spirit is accorded a surprising amount of weight, but West isn’t sentimental. Pearl’s imagination, horniness, and madness are all wrapped up together, emitting wild creative sparks. Ruth is a routine harridan mother, think Piper Laurie’s crazed mother in Brian De Palma’s “Carrie” without the theatricality, and while that characterization is a disappointment it allows us to subversively cheer Pearl on.

“Pearl” is less violent than “X” but more twisted. It’s a celebration of an artist’s selfishness, and its wild tonal swings mark a new path for West, who is often devoted to rigid set-ups and slow burns. Pearl frees not only herself, but West.