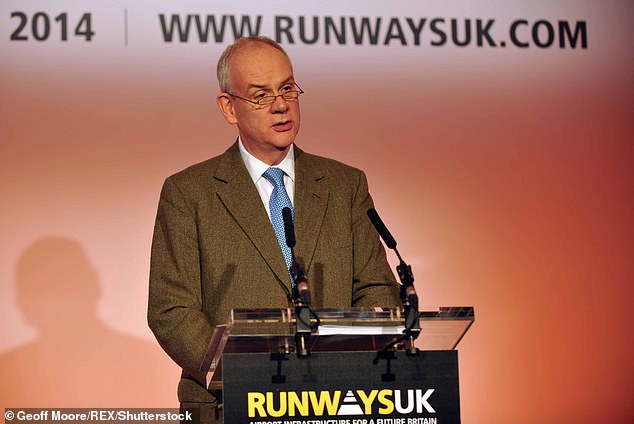 A Boris loyalist Tory peer has launched an attack on police for investigating the Prime Minister over Partygate, saying officers should ‘butt out’.

Lord Daniel Moylan, who was an adviser to Mr Johnson when he was mayor of London, accused Scotland Yard of treating the PM like the hosts of ‘egregious acid house parties’.

Senior politicians are awaiting the results of the Metropolitan Police probe, with Mr Johnson facing the possibility of becoming the first serving leader to face criminal action for breaking the law.

He complied with a request to return a questionnaire to officers investigating a string of events in Downing Street amid claims that they were parties that broke lockdown rules.

Mr Johnson is expected to argue that he believed all the functions he attended were essential for work, but Downing Street has insisted the document will not be made public.

Lord Moylan reacted to claims that the police sent similar questionnaires to people on no10 about events they did not attend, telling the Telegraph:  ‘Time for the police to butt out of this farcical investigation.’

‘My view has always been that during the pandemic the role of the police and the role police gave themselves was to seek compliance with the regulations through a gentle word of encouragement and admonition.

‘Only in the case of recidivist and egregious acid house parties did police start to use enforcement powers. I don’t know of any other case where they have started an investigation to require retrospective compliance.

Lord Daniel Moylan, who was an adviser to Mr Johnson when he was mayor of London, accused Scotland Yard of treating the PM like the hosts of ”egregious acid house parties’.

Senior politicians are awaiting the results of the Metropolitan Police probe, with Mr Johnson facing the possibility of becoming the first serving leader to face criminal action for breaking the law.

‘I was astonished when police said they were going to seek to do it. They are not seeking compliance. They are seeking punishment.

‘That wasn’t their purpose in enforcing Covid regulations.’

Officers involved with Operation Hillman, which is examining whether Covid restrictions were broken in Downing Street and across Whitehall, sent formal questionnaires to approximately 50 people as they lookinto the details of alleged Covid rule-breaking.

Cabinet Office official Sue Gray carried out a probe into claims of lockdown breaches at the top of Government but has only published an interim report while she waits for the police investigation to be completed.

Out of 16 events Ms Gray reviewed, police are investigating 12 of them, including as many as six that the Prime Minister is reported to have attended.

Mr Johnson is believed to have attended as many as six of the parties being investigating by the Metropolitan Police.

The remarks by Lord Moylan are his latest controversial remarks in recent weeks.

A fortnight ago he provoked anger in Yorkshire when he said he was worried he would find ‘leftist whingers begging for handouts’ during a visit to the county, during a Twitter tirade against the Yorkshire Post.

The former merchant banker who went on to become Boris Johnson’s chief adviser on airports and Crossrail 2, sent the fiery tweet head of a planned break in the county.

It came after the newspaper’s planned front page for Saturday was published online, carrying a headline which criticised the Conservative government’s ‘levelling up’ plan as a failure.

The Baron took umbrage with the Yorkshire Post’s suggestion and bit back sharply.

‘I’m going to Yorkshire for a short break next week. Everything I’ve read recently in @yorkshirepost makes me fear I’m going to find it transformed into a county of leftist whingers begging for handouts,’ he tweeted.

The brutal tweet alienated many users, who swiftly condemned the Baron’s harsh words and strongly encouraged him to take his weekend break elsewhere.

Editor of the Yorkshire Post James Mitchinson was one of the first to respond, taking aim at Moylan’s Conservative cronies before referring to him sarcastically as ‘m’Lord’.

‘You’ll find folks thoroughly fed up with sneering politicians who think they’re better than us and an awful lot of people who cannot stand liars and charlatans,’ Mitchinson wrote.