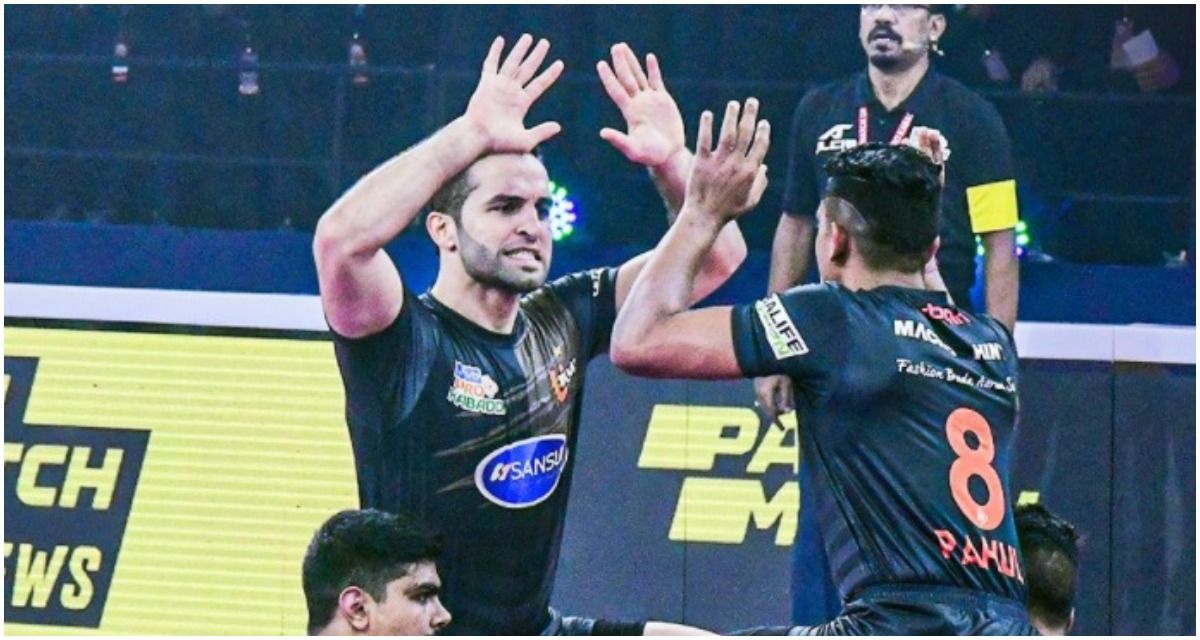 The U Mumba raider clinched a Super 10 (19 points) and was ably supported by the team’s defence in a statement victory by the season 2 champions. Also Read – MS Dhoni Bats For ‘Le Panga’ Attitude Among Fans in PKL Season 8 Campaign #JoBhiDegaWohBadehega

Pawan Sehrawat had an off day for Bengaluru Bulls who missed a quality third raider to support Chandran Ranjit and Pawan. Also Read – Pro Kabaddi League Season 8 Schedule And Venue Announced: All You Need to Know

There were no spectators at the stadium due to the COVID-19 threat but that certainly didn’t take the energy away from the match.

The first raid of the season resulted in a successful tackle on the “high-flyer” Pawan Sehrawat by Harendra Kumar.

The first few minutes went on to be dominated by the team from Mumbai with Abhishek Singh picking up important raid points.

Fazel Atrachali, captain of Mumbai in the left corner, had very little to do, as his defenders Harendra and Ashish Sangwan ensured the Bulls raiders struggled to pick the points. U Mumba forced the game’s first ALL OUT in the 8th minute and opened up a 6-point lead (11-5).

But the Bulls, season 6 champions, were in no mood to let Mumbai open up a healthy lead. Chandran Ranjit produced two Super Raids (3 or more points) for the Bulls to close the gap but Bengaluru failed to inflict an ALL OUT when Abhishek Singh revived his team with a 4-point Super Raid.

The lack of do-or-die raids in the first half was testimony to the high pace with which the match was being played. The Bulls had just one tackle point in the half and they brought in Amit Sheoran.

But that could not stop U Mumba from inflicting another ALL OUT in the second minute after restart. U Mumba’s Ajith Kumar and the pack of defenders ensured the Bulls never narrowed points gap.

Just as Bulls sensed a comeback, U Mumba’s “Sultan” Fazel Atrachali produced a Super Tackle with five minutes left in the clock and Ajith Kumar followed it up with a three-point Super Raid. U Mumba fetched another ALL OUT with three minutes remaining to seal the match.