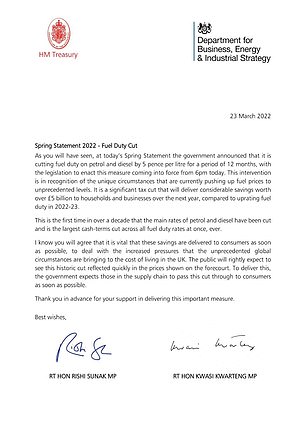 Asda and Sainsbury’s have said they will cut petrol prices by 6p a litre after Rishi Sunak and Kwasi Kwarteng begged petrol stations to pass on a 5p fuel duty cut at the pumps from tonight.

It comes after Chancellor Mr Sunak and Business Secretary Mr Kwarteng today wrote to retailers saying ‘the public will rightly expect to see the cut reflected quickly in the prices shown on the forecourt this evening’.

The change in pricing is expected to come into force from 6pm this evening, though timing could differ across the country.

Asda was the first major supermarket to confirm a cut in prices, with a 6p decrease in petrol and diesel, before Sainsbury’s and Tesco followed suit earlier today.

Morrisons has also said it will cut pump prices by 5p from 6pm.

Sainsbury’s boss Simon Roberts said: ‘We understand that the cost of living is a real challenge for many households and we are committed to helping our customers as much as we can.

‘We welcome the Chancellor’s announcement today which will save motorists money and we are passing the cut to fuel duty to our customers at the pumps across every single one of our 315 forecourts from tonight.’

Following his statement today, Mr Sunak said: ‘We are facing the same challenges that many countries around the world are facing and that’s rising prices and high inflation. Inflation here is running a bit lower than it is in America – similar to what is happening in the Eurozone.

There is uncertainty ahead. I wish I could but I can’t protect everyone against the full impact of those global challenges, but where we can make a difference, of course we will.

‘That is why the policies I announced today are a significant intervention that will put billions of pounds back into the pockets of hard working British families. We are on people’s sides through this difficult time.’

It follows critics pointing out that the eye-watering rise in fuel prices means that while the 5p cut is welcome – UK drivers are seeing forecourt increases at that rate every 24 to 48 hours.

Motorists continue to battle sky-high prices, with the average cost of a litre of petrol at British forecourts yesterday at 167.3p, while diesel was 179.7p.

This is a rise of 18.0p per litre for petrol and 27.0p for diesel over the past month, in one of many factors squeezing household incomes as the pandemic subsides and Russia’s attack on Ukraine intensifies.

In a joint letter to supermarkets and petrol giants such as Texaco, Shell and BP, Mr Sunak and Mr Kwarteng said: ‘I know you will agree that it is vital that these savings are delivered to consumers as soon as possible to deal with the increased pressures that the unprecedented global circumstances are bringing to the cost of living in the UK’.

The 5p cut in fuel duty was today blasted by UK motoring groups as a ‘drop in the ocean’ for hard-pressed drivers as pump prices continue to hit record levels.

Chancellor Rishi Sunak said the new reduction in fuel duty would last until March 2023 – with the move expected to reduce the cost of filling a 55-litre tank by £3.30.

Oil prices surged straight after Russia’s invasion of Ukraine which led to an initial increase in wholesale costs for fuel retailers, although prices dropped last week.

Mr Sunak said the reduction will come into force at 6pm tonight – but motoring groups will be watching whether retailers pass on the savings to drivers, after they were accused of failing to pass on a reduction in wholesale costs earlier this month.

Ahead of today’s announcement, fuel duty had been levied at 57.95p per litre for petrol and diesel, with VAT at 20 per cent charged on top of the total price.

Reacting to Mr Sunak’s announcement today, RAC head of policy Nicholas Lyes told MailOnline: ‘With petrol and diesel prices breaking records almost daily, and the cost to fill up a petrol car at over £92 and a diesel at nearly £100, we’re pleased to see the Chancellor has given drivers some much-needed relief at the pumps, but the reality is that a 5p cut in duty is something of a drop in the ocean.

How much money will I save from fuel duty cut?

Chancellor Rishi Sunak has announced a cut in fuel duty of 5p per litre in his spring statement. Here are a series of key questions about taxes on fuel:

What is fuel duty?

Fuel duty is levied at a rate of 57.95p per litre for petrol and diesel.

How long has it been at that level?

VAT is added on top, at a rate of 20 per cent of the combined product price and duty.

What are the latest average pump prices?

The average cost of a litre of petrol at UK forecourts on Tuesday was 167.3p, while diesel was 179.7p, figures from data firm Experian Catalist show. This is an increase of 18p per litre for petrol and 27p for diesel over the past month.

Why have prices reached record highs?

Oil prices surged immediately after Russia’s invasion of Ukraine due to supply fears, leading to a rise in wholesale costs. Prices were already increasing as global economies recover from the coronavirus pandemic.

How much will I save from a 5p per litre cut in duty?

The RAC has calculated this would reduce the cost of filling a typical 55-litre family petrol car by around £3.

What impact could the move to electric cars have?

The switch from traditionally fuelled cars to battery-powered models could cause the Treasury’s annual fuel duty income from cars to drop from £16.4 billion in 2019 to £11.4 billion in 2028, according to analysis by the RAC Foundation.

‘In reality, reducing it by 5p will only take prices back to where they were just over a week ago.

‘With the cut taking effect at 6pm tonight drivers will only notice the difference at the pumps once retailers have bought new fuel in at the lower rate.

‘There’s also a very real risk retailers could just absorb some or all of the duty cut themselves by not lowering their prices.

‘If this proves to be the case it will be dire for drivers. It also wouldn’t be totally unexpected based on the biggest retailers not reducing their prices late last year when the oil price fell sharply.

‘Temporarily reducing VAT would have been a more progressive way of helping drivers as the tax is applied at the point the fuel is sold, removing any possibility of retailers taking some of the tax cut themselves to increase their profits.

‘It’s also the case that the Treasury is benefitting hugely from the high fuel prices because of greater VAT revenue.

‘The Chancellor is currently getting 28p a litre VAT on petrol and 30p on diesel – this of course comes on top of fuel duty as VAT is a tax on a tax.’

And AA president Edmund King told MailOnline today: ‘The AA welcomes the cut in fuel duty. However, we are concerned that the benefit will be lost unless retailers pass it on and reflect a fair price at the pumps. Average pump prices yesterday hit new records – despite the fall in wholesale costs.

‘The Chancellor has ridden to the rescue of UK families and businesses who use their vehicles, not for pleasure, but to function in their daily lives.

‘Since the start of the year, the 20p-a-litre surge in pump prices has been the shock that rocked the finances of families, and particularly young drivers, pensioners and lower-income workers who need to commute each day.

‘AA research showed that even in November, when petrol pump prices set new records at around 148p a litre, 43 per cent of drivers were cutting back on car use, other spending to compensate or both.

‘On top of the duty cut, there has been a substantial reduction in wholesale road fuel costs feeding through to the forecourts since March 9.

‘That needs to drive lower pump prices also. The road fuel trade shouldn’t leave the Treasury to do the heavy lifting when cutting motoring costs.’

Meanwhile motorists on social media described the move as a ‘joke’ which ‘won’t make any difference’, while another said: ‘This will do nothing.’

And Howard Cox, founder of the FairFuelUK campaign, told MailOnline today: ‘It would be churlish not to be thankful to the Chancellor in cutting Fuel Duty by 5p for 12 months. Well done, Rishi.Our relentless campaigning has been fruitful.

‘It will give some respite to millions of motorists, that have had and continue to have no choice but to drive. Just as important this fiscal relief to hauliers and small businesses teetering on survival, desperately need this reduction more than most road users, it’s way overdue.

‘It will only benefit drivers and the economy if the new fuel taxation level becomes permanent and is accompanied by the introduction of an independent pump pricing watchdog, we’ve notionally called PumpWatch.

‘Today’s fuel duty reduction must be passed onto drivers immediately.’

Sarah Coles, senior personal finance analyst at Hargreaves Lansdown, said: ‘The fuel duty cut is better than a poke in the eye with a sharp stick, but it’s hardly going to be lifechanging for hard-pressed motorists.

‘With the cost of unleaded petrol now almost £1.67 a litre on average it’s still going to mean we need to make some horribly difficult decisions about how and where we travel in future.

‘It’s also going to continue inflating the cost of transporting anything to stores, which will gradually feed into the price of everything on the shelves. Life is going to keep getting more expensive, and this cut isn’t going to change that.’

And Alex Kindred, car insurance expert at Confused.com, said: ‘Fuel prices continue to rise at record-breaking figures, so the cut to fuel duty is a small step in the right direction.

‘With the average cost of a tank of petrol nearly at £91, the cut will mean 5p off per litre and around £2 off your bill, on average.

‘Although it might not seem a lot in the grand scheme of things, if you tally this up every time you fill up your tank, the savings do add up. Although, this is still extremely high and unaffordable for some, so it’s clear there’s still a need to cut fuel costs.’

He said the company’s research found that two in five UK drivers are ‘making a conscious effort to drive less in order to save on fuel at the moment’.

Announcing the duty cut in his spring statement, Mr Sunak said the UK Government wanted people to know they will ‘stand by them’ in dealing with rising living costs.

He told MPs: ‘Today I can announce that for only the second time in 20 years, fuel duty will be cut. Not by one, not even by two, but by 5p per litre.

‘The biggest cut to all fuel duty rates – ever. While some have called for the cut to last until August, I have decided it will be in place until March next year – a full 12 months.

‘Together with the freeze, it’s a tax cut this year for hard-working families and businesses worth over £5 billion, and it will take effect from 6pm tonight.’

Ahead of the announcement, Dr Doug Parr, policy director at Greenpeace UK, had said: ‘The Chancellor should only cut fuel duty if he can make an equivalent cut to the costs of public transport, which offers more environmentally friendly support for those facing this cost-of-living crisis.’