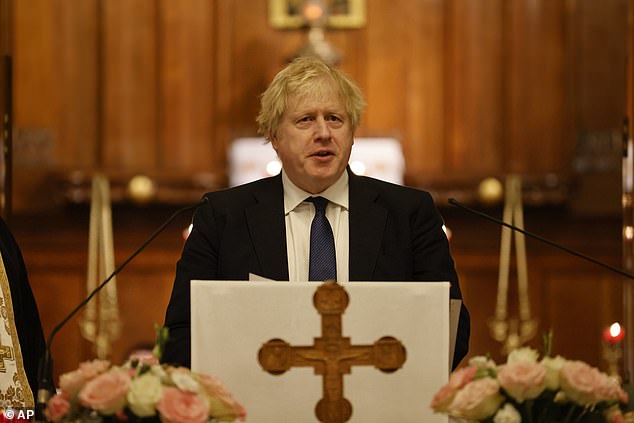 Britain today faced calls to be more generous to fleeing Ukrainians after a minister suggested those escaping the warzone should apply to pick fruit – while a new scheme only allows those with family in the UK to get a visa.

Boris Johnson, who joined a mass at a Ukrainian church in London last night, said thousands of refugees would benefit from the suspension of normal visa rules in light of the humanitarian crisis sparked by Russia‘s invasion.

But campaigners said the pledge fell ‘well short’, and contrasted it with the EU’s decision to allow citizens of Ukraine to enjoy visa free travel for three years to help them escape the conflict.

Boris Johnson, who joined a mass at a Ukrainian church in London last night, said thousands of refugees would benefit from the suspension of normal visa rules in light of the humanitarian crisis sparked by Russia’s invasion

The Daily Mail and Mail on Sunday UKRAINE REFUGEE APPEAL

Readers of Mail Newspapers have always shown immense generosity at times of crisis.

Calling upon that human spirit, we are now launching an appeal to raise money for refugees from Ukraine.

For, surely, no one can fail to be moved by the heartbreaking images and stories of families – mostly women, children, the infirm and elderly – fleeing from Russia’s invading armed forces.

As this tally of misery increases over the coming days and months, these innocent victims of a tyrant will require accommodation, schools and medical support.

All donations to the Mail Ukraine Appeal will be distributed to charities and aid organisations providing such essential services.

In the name of charity and compassion, we urge all our readers to give swiftly and generously.

TO MAKE A DONATION ONLINE

Via bank transfer, please use these details:

TO MAKE A DONATION VIA CHEQUE

Mr Johnson said: ‘In the last days the world has witnessed awe-inspiring displays of bravery and heroism from the Ukrainian people in response to those who seek to obliterate their freedom by force.

‘The UK will not turn our backs in Ukraine’s hour of need. We are providing all the economic and military support we can to help those Ukrainians risking everything to protect their country.’

The visa move means that ‘close family members’ of Ukrainians settled in this country will be allowed to come to the UK without meeting normal entry requirements, such as having a job in a shortage area.

A Government source said the change would ‘benefit many thousands of people who at this moment are making desperate choices about their future’.

But Labour called for ministers to immediately extend the opportunity to wider relatives before setting out a ‘broader sanctuary route’ to help other Ukrainians.

‘Today the EU announced visa free travel for 3 years. Johnson’s government is only allowing close family members of British nationals. No way is the UK out in front in helping refugees.’

‘Rachael Maskell, for York Central, added: ‘We must open our border to all Ukrainians and pull our weight in supporting victims of this terrible war.’

Today, Chairman of the Foreign Affairs Committee Tom Tugendhat said ministers had indicated the UK is ‘likely’ to follow the EU in taking in Ukrainian refugees for up to three years.

The Conservative MP said he had talked with members of Government who were ‘hopeful’ the policy on taking in Ukrainians fleeing the Russian invasion would be reviewed within the coming days.

Asked whether the UK Government had gone far enough in offering sanctuary to refugees, Mr Tugendhat told BBC Radio 4’s Today programme: ‘I’ve been speaking to ministers this morning and I can tell you there are many who are hopeful that this will be something that’s reviewed in the coming days.’

Questioned about the EU’s announcement that member countries would grant asylum to Ukrainian refugees for up to three years, Mr Tugendhat said: ‘I suspect that’s likely to be where we end up to be honest.’

‘I think there’s a definite opportunity to be generous,’ he added.

The Government faced a backlash over the weekend after Immigration Minister Kevin Foster suggested Ukrainians fleeing the war should continue applying to work as fruit pickers if they wanted to come to the UK.

Mr Foster tweeted that there were ‘a number of routes, not least our seasonal worker scheme… which Ukrainians can qualify for’.

Today, Defence Secretary Ben Wallace said he has ‘no doubt’ that Britain will do more to help Ukrainian refugees.

He told BBC Radio 4’s Today programme the UK has a ‘very generous’ track record in helping those in need of aid.

‘I think what I would say is, you know, our track record so far, both with Afghans and (the) Arap scheme, and indeed with the Hong Kong nationals who were suffering persecution, has been actually very generous,’ he said.

‘So there’s no reason to doubt we won’t continue on that path.’

He added that it is not yet clear whether the European Union’s approach will be to support refugees on the border, with the hope they will be able to return to Ukraine soon, but discussions are continuing.

Liz Truss yesterday insisted that Britain would play its part in helping with the crisis, which experts fear could result in five million people fleeing Ukraine.

The Foreign Secretary said the UK was already helping establish support for refugees arriving in neighbouring countries like Poland.

But she said ministers were working ‘urgently’ on plans to allow more refugees to travel directly to the UK.

Miss Truss said the PM had been ‘very clear that we are a country that welcomes refugees, that we will do all we can to support the Ukrainians’.

The Guardian yesterday reported that a 69-year-old widow fleeing fighting in Kharkov had been denied entry to the UK where she had hoped to reunite with her daughter in London.

Under the new rules, Ukrainians who can show they have a close relative resident in the UK will be allowed in.

Enver Solomon, head of charity the Refugee Council, said: ‘Whilst we welcome the Government’s decision to relax visa requirements for Ukrainian people seeking to unite with their family members in the UK, it falls well short of what is needed and does very little to reassure Ukrainian’s fleeing war and bloodshed that that they will be able to seek sanctuary in our country.

‘In comparison to the EU’s decision to take in refugees for up to three years without having to apply for asylum it looks mean-spirited and sends a message to desperate Ukrainians in search of safety that unless they have a family member in the UK they are not welcome.

‘The government must show it cares and immediately establish a safe route, so all Ukrainian families, who through no fault of their own have been forced from their homes, can easily apply for a humanitarian visa to travel to the UK.’

A man sleeps on a bench inside the railway station at Przemysl in Poland. The country is currently the main destination for Ukrainians fleeing the conflict

A Whitehall source said visa rules for Russian nationals seeking to enter the UK were likely to be tightened.

However, ministers rejected calls from Tory MP Roger Gale, who said all Russians living in the UK should be deported in order to ‘send a very harsh message through the Russian people to Putin’.

Foreign Office minister Zac Goldsmith rejected the idea, saying: ‘There are 70,000 Russians in the UK. Our quarrel is not with them or with Russian people – it is with Putin and his cronies. Too many influential people are choosing to conflate the two. It is both unfair and dangerous, and it must stop.’

The row came as the PM announced a new aid package for Ukraine.

The £40 million initiative will provide medical supplies such as medicines, syringes, dressings and wound care packs.

The package takes total UK aid to Ukraine this year to £140 million, with Britain also supplying a range of defensive equipment, such as anti-tank missiles.

UKRAINE-RUSSIA WAR LIVE: Get the latest news on Putin’s invasion