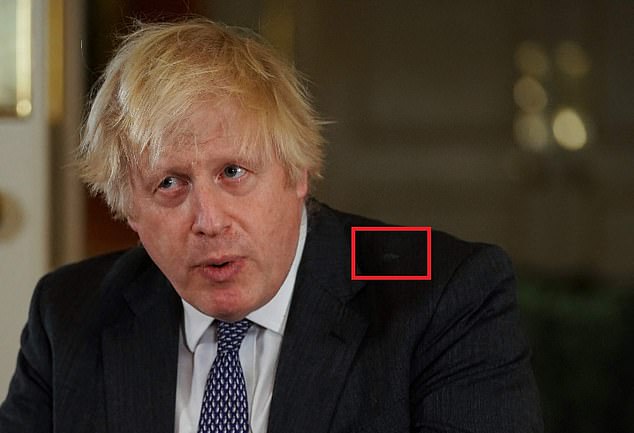 Is that baby sick on your shoulder Boris? PM addresses the nation with suspicious stain on his suit, sparking social media suggestions that his new daughter had made her mark already – as Carrie spends a third night in hospital

His suit was typically creased and his hair unkempt when he addressed the nation from Downing Street last night.

But could Boris Johnson‘s new daughter have also made her mark on his sartorial style?

Social media was abuzz following the Covid address in which the Prime Minister unveiled plans for a sped-up booster campaign with a suspicious mark on his left shoulder.

Could it be that he had been burping his days-old new daughter and she had left him with a small gift?

Mr Johnson’s wife Carrie and their daughter spent their third night in hospital last night, with the PM visiting hours before his televised speech.

And online jokers suggested he needed to invest in a muslin after spotting the mark when he appeared at 8pm last night.

However, it appears that the social media wags were barking up the wrong tree.

Mr Johnson went to  the London hospital he was pictured wearing jeans and a grey jacket. However, for his televised address he had changed into a dark suit.

The Prime Minister was spotted leaving Downing Street via a back entrance at lunchtime on Sunday.

Mrs Johnson gave birth to her second child with the Prime Minister on Thursday.

The couple announced they were expecting their second child together at the end of July, as the 33-year-old environmental campaigner spoke of having a miscarriage earlier in the year.

The birth of a sister for Wilfred came the morning after the Prime Minister announced England is entering ‘Plan B’ to combat the spread of the Omicron variant of coronavirus.

Mr Johnson’s televised pledge to dish out a million booster jabs a day to beat Omicron has descended into chaos on its first day, with vaccine centres warning stocks are already running low and Britons left standing in ‘two hour’ queues.

Britons waited in lines stretching at least 300 yards for boosters this morning, which started forming before centres even opened.

And the NHS booking system crashed as thousands tried to secure a slot for their top-ups. It is now back online, but telling people stuck in long queues to ‘try again tomorrow’.

Lateral flow tests also ran out today, with the Government website saying: ‘Sorry, there are no more home test kits available right now.’ From tomorrow, vaccinated people who are close contacts of a Covid case will be asked to swab themselves once a day. Experts have urged people to test themselves repeatedly in the run up to Christmas.

NHS bosses warn that scaling up the booster programme now will be ‘incredibly difficult’ and inevitably have ‘consequences’, with patients once again facing the threat of cancelled operations.

In a massively ambitious move last night, the Prime Minister brought forward the deadline to offer all over-18s a third jab by New Year’s Day as he warned the country: ‘There is a tidal wave of Omicron coming.’

The Army and thousands of extra volunteers will be drafted in to achieve the target, and clinic hours extended to help dish out up to 20million jabs over the next two-and-a-half weeks.

The drive will also see 42 military planning teams across every region, additional vaccine sites and mobile units, an extension of opening hours for clinics so they run seven days a week and thousands of extra volunteer vaccinators trained.

But concerns about whether the Government could even hit the goal were raised almost immediately after Mr Johnson’s 8pm announcement last night. Even at the height of the NHS’s vaccine drive in March, the health service never managed more than 850,000 jabs a day.

GPs fumed they found out about the goal at the same time as the rest of the nation, and NHS bosses warned it would take ‘time’ to get the scaled up programme ‘fully up and running’.

Former Cabinet minister David Davis and Labour MPs slammed the Government for failing to ramp up the booster drive in September, and warned the ‘vaccine wall of defence was crumbling’.

Health Secretary Sajid Javid said today that patients waiting for elective surgery such as hip replacements could see their treatment posponed as the NHS races to roll out a million jabs a day. He promised, however, that critical care for cancer patients would be unaffected.

The PM’s intervention last night comes amid the ever-growing threat of tougher restrictions in January, with the potential for a new lockdown if Omicron cases surge out of control after the UK’s Covid alert level was raised from Level 3 to Level 4.

Both Scotland and Wales have dangled the possibility of having to go even further in bid to ward off the highly-transmissible variant.