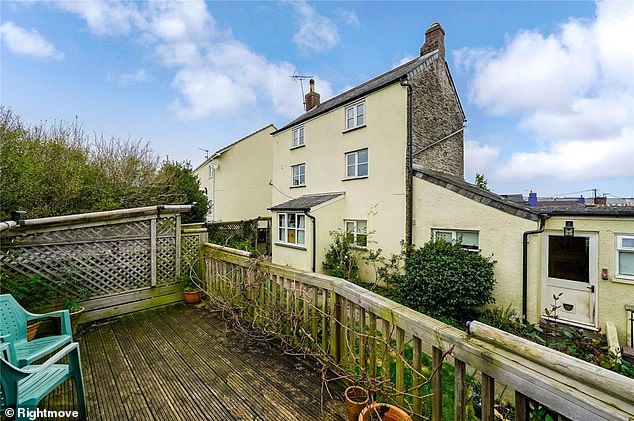 What does the average property asking price get you? We take a look at six homes you can buy with a budget of £355,000

By Myra Butterworth For MailOnline

The average price of a home in Britain has risen to its highest level on record, breaking through the £350,000 mark.

They have increased 10.4 per cent during the past year to reach an average of £354,564, according to Rightmove.

The rises come amid an imbalance between strong demand from buyers and a low level of available homes for sale.

There are now more than twice as many buyers as sellers in the market.

What does the average asking price get you? This semi-detached property is in the Welsh coastal village of Llanon is on the market for £355,000 (scroll down for more details)

Tomer Aboody, of property lender MT Finance, said: ‘Even though asking prices continue to rise, buyers can’t risk hanging around in order to secure their new home for fear of missing out.

‘Many are prepared to pay record prices due to lack of supply, particularly while they can still take advantage of low mortgage rates.’

‘Flats are not in such demand, particularly those which don’t come with outside space or good connectivity, as stretched affordability and deposit raising is increasingly an issue.’

Below, we take a quick look around the country to find some average prices properties, each displaying a price tag of £355,000. The question is, which one would you pick?

This semi-detached property is in the Welsh coastal village of Llanon has been in the same family for 100 years.

It has four bedrooms as well as a garden with a pond and an aviary. The land at the rear of the property has previously had planning consent for a detached three bedroom bungalow.

It is on the market for £355,000 and is being sold via estate agents Purplebricks.

This three-bedroom house is in the Devon village of Loddiswell, just over three miles from the market town of Kingsbridge.

It is arranged across three levels and includes a wood burning in the main living area. The property has a price tag of £355,000 and is being sold via Marchand Petit estate agents.

This five-bedroom family home is in Broxburn, in Scotland’s West Lothain.

As well as a garden at the front and rear of the property, there is also a multi-car driveway and a detached double garage.

The detached home is being sold by Alba estate agents and has an asking price of £355,000.

This four-bedroom house is surrounded by similar executive homes and includes a dual aspect living room, TV points in every bedroom, and a driveway with enough space for five cars.

This four-bedroom detached is in the pretty rural village of South Littleton, around eight miles to the north east of the market town of Evesham of Worcestershire.

It is on the market for Hayman-Joyce estate agents with a price tag of £355,000.

House prices tend to be higher in London. And while that still remains the case, the capital lost some of its appeal during the pandemic as buyers sought more space following successive lockdowns.

Flats, in particular, lost their shine if they had restricted access to open green spaces, whether that was a private garden, communal outdoor areas on a development, or near a public park.

And some flats were already dealing with issues before the pandemic struck, such as toxic ground rents and dangerous cladding, leaving their owners unable to sell.

Despite this, flats have regained some of their value as workers head back to the office.

Take, for example, this property in East London’s Wapping. It is leasehold and has one bedroom. It is for sale for £355,000 via Docklands Estates.

This one-bed leasehold flat in East London’s Wapping is for sale for £355,000 via Docklands Estates