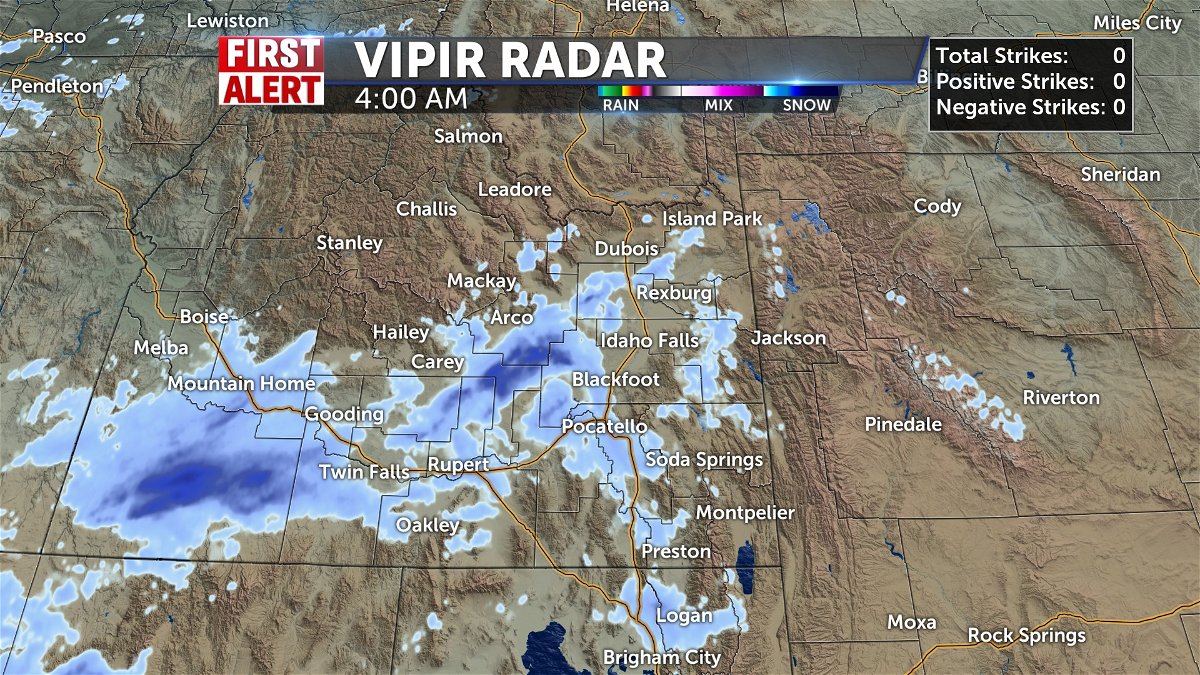 TODAY: Heavy snow showers are crossing over most of the region during the day today with very windy conditions. Snow showers will be more present across the Snake River Plains and eastward in the morning hours, but will start to diminish in number to be a lot more isolated in the afternoon, and should be gone by the overnight hours. Winds will look to decrease during the day as well. In the morning, we should see sustained winds between 20-30 mph with gusts up to 50 mph, but winds should slow slightly down in the evening down to 10-15 mph with gusts up to 30 mph. Accumulation looks to be between 2-4 inches for the Snake River Plains and eastward as well. Calm conditions with partly cloudy skies can be found only within central ID today around Salmon. High temperatures across the region only get up to the 20’s and teens.

TOMORROW: A break is finally in store from the snow tomorrow for the most part. We could still see a slight snow shower appear especially for the more mountainous regions during the day, but besides that everywhere should be dry. Winds will be slightly breezy between 10-15 mph. High temperatures drop greatly drop though with highs only in the 10’s and single digits.

LONG TERM: Snow showers come back on Wednesday with calm winds at least. Winds pick up with more isolated snow showers continuing on Thursday and Friday. Calm conditions follow on the weekend. During this stretch, high temperatures slightly rebound to the low 20’s by the end of the week, but decrease back to the 10’s for the weekend. Low temperatures stick mostly in the single digits both positive and negative starting tonight and lasting the entire week.

WINTER STORM WARNING NOW IN EFFECT UNTIL 9 PM MST THIS
EVENING for Idaho portion of the northern Wasatch Mountains,
including Emigration Summit

WINTER WEATHER ADVISORY NOW IN EFFECT UNTIL 9 PM MST THIS
EVENING for Centennial and Big Hole Mountains including Targhee and
Pine Creek Passes, Portions of U S Route 20 and State Highway
87, Interstate 84, 86, 15 corridor and the Southern
Highlands including Malad and Sweetzer Summits, Arco Mud Lake Desert and the Beaverhead Lemhi
Highlands. This includes Mud Lake, INL, Craters of the Moon,
Dubois, Spencer, Edie School, and Small, Teton Valley south through the Caribou Mountains to
Bear Lake Valley, including Georgetown Summit